An area once plagued by vacant lots is rapidly turning into one of Calgary’s most desirable pieces of real estate. The Calgary Municipal Land Corporation (CMLC) has invested more than $180 million in the area known as East Village. 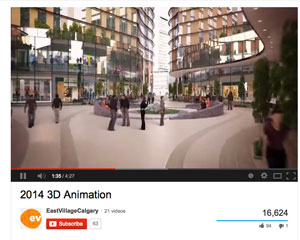 The CMLC recently announced a number of additions Calgarians can expect to see in the “urban village,” including the first multi-family project by a local developer, the start of the new 300-room Hilton Hotel and the anticipated sale of 300 residential units.

As well, the area will see the first divestment of land for a new rental apartment complex in the spring, the fall unveiling of the design for the new Central Library and the opening of the St. Patrick’s Island Bridge.

Calgarians will be “awe-struck”

Michael Brown, CMLC president and CEO, said Calgarians will be “awe-struck” when they see the finished area, demonstrated by the CMLC in a 3-D animation. “If you haven’t been here in a while, it’s worth the trip to see the change,” said Brown.

The project features a south-facing rooftop terrace with pool and fitness facilities, along with library and convention services and two levels of underground parking.

Vancouver’s Embassy Development Corporation is building the first of three phases of condos, respectively known as Fuse and Pulse with a third as of yet unnamed. The development will add up to about 700,000 sq. ft. of retail and residential and will cost $300 million.

Ontario-based FRAM + Slokker Developments is building another 600,000-sq.-ft. mixed-used project at a cost of $300 million.

Over and above its own investments, the CMLC has managed to attract more than $1 billion in planned investments.

The levy’s catchment area is the Rivers District, encompassing 309 acres of Calgary, of which East Village is a part.

The idea to revitalize the East Village first came about in 2005. In 2008, the CMLC organized an international competition to provide advice on the master plan. The British architectural practice, Broadway Malyan, was subsequently awarded the project.