Canada ICI has big plans for TO office

For most of its 22-year history, Edmonton-based Canada ICI has been a Western Canada phenomenon, an Edmonton-based boutique mortgage origination firm that has swelled to today providing $2.5 billion in loans annually across Canada. 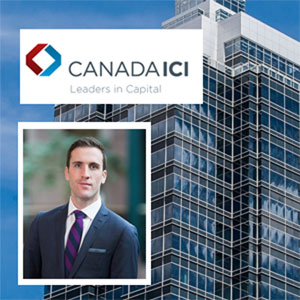 The company began its eastward migration when it opened a Winnipeg office (adding to existing ones in Edmonton and Calgary) and is now targeting Toronto with the creation of a four-person outpost headed by Brent Magnan, who holds the title of Vice-President Origination for Toronto.

Why Toronto and why now?

“Toronto is a ripe opportunity because our platform is very unique and founded on the principle of executing with a high degree of service,” said Magnan. “We feel that developers and landlords in this market will benefit from the large infrastructure that we’ve developed to support the growth of our clients.

“We’ll keep doing what’s made us successful in other markets. At the end of the day, whether it’s a client from Calgary or Ottawa, clients demand a strong team to support the execution of an assignment.”

Magnan does not expect the Toronto office to remain small for long. “We have got pretty big plans for Toronto. We plan to scale up in this market very significantly.”

“We would expect that in three years we would have five high-performing teams each doing over $150 million of volume working out of this market. The only way you can sustain growth is by supporting the people who are driving it. We’ve done this in three different markets, and we’ll take the same approach here.”

For Magnan, what sets Canada ICI apart from other lenders is its status as the largest mortgage brokerage in Canada in terms of volume with about $2.5 billion in new loans each year, its dominance of the Western Canadian market and a new national platform thanks to its Toronto opening.

That size makes it appealing “to institutional or larger landlords and developers that might be doing the work in different markets.”

The Canada ICI executive also touts the company’s approach to providing project loans. “We are known for doing a very thorough underwriting of that loan. We put  together a CIM (what we call a Confidential Information Memorandum).

That attention to detail with its underwriting package “represents our clients well” and “makes the lender’s ability to go through that deal and size it up really quickly and turn it around quickly” and hopefully increases the chances of a deal going through and at better terms.

“We spend a little bit more time upfront but we think that is worth it.”

“We are really quite integral to the process and helping guide and structure the actual deal itself,” he said.

“We are known for adding a lot of creativity or deal structure,” he added. “Each lender has their loan parameters or their box where they will play and it is our job to work outside of that and to either work with lenders to bring some flexibility to their loans or to maybe even bring some new sources of capital to that borrower client that they might not even be aware of.”

Magnan gives the example of a condo development in Toronto that would require the developer to pre-sell 50% of the building before it can secure the loan. Often that pre-sell period can stretch out and jeopardize planned start dates, he noted.

“We would find a solution in which we would let the developer get going without as many pre-sales or in some cases without any pre-sales at all. It could be a huge advantage for them in that it lets them get going quicker, maybe lets them sell those units for a higher price because people actually see the building going up.”

Canada ICI is also a direct lender, which ties into its identity as a highly creative financier. “If we don’t feel that a financing option is there in the third-party lending market, then we can typically structure something very unique with our own capital.”

Prior to establishing a permanent presence in the country’s largest city, Canada ICI was already active in Toronto, coordinating financing for some of the city’s most notable properties and landlords.

Most notably, the company put together the construction financing for Toronto’s Trump tower.

“We’ve had long-term mandates with some of the largest publicly and privately held companies based right here in Toronto, but now with our local presence we look forward to showing new clients what we can do.”