Capitalization rates have been relatively stable nationally and investment momentum is growing, according to CBRE Canada’s second quarter report on Canadian cap rates and investment insights. 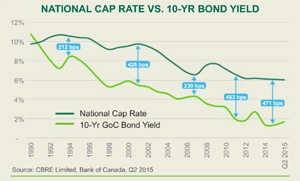 Morrassutti said there’s no homogeneous national investment market, as things are divided by geography and asset quality, but he expects sales volumes to pick up across the country in the second half of the year after a fairly quiet start.

Ongoing concern with potential fallout from Greek debt negotiations and a slumping Chinese stock market, combined with a low Canadian dollar, should benefit this country’s commercial real estate market as investors appreciate the stablity of Canadian properties despite slow economic growth. As long as long as liquidity is maintained, Morassuitti expects the current investment conditions to continue.

While Canadian property is attractive to investors, according to Morassutti, buyers and lenders alike remain very discerning when it comes to assets that have leasing or market risks.

“The momentum of capital has shifted back to the east and to Vancouver,” said Morassutti. “Chinese capital is beginning to make waves in Canada, primarily in Vancouver and Toronto.”

In a show of confidence in the Vancouver market, foreign and domestic buyers and sellers transacted a wave of deals where there’s cap rate compression in downtown class-A and B office properties and in regional malls. Foreign capital is most active in the sub-$50-million investment range, particularly in small to mid-sized residential development sites.

Most commercial asset classes experienced cap rate compression in Toronto, where the bidding pool remains deep and investment activity has been driven by both marketed and off-market deals.

The news isn’t as good in Calgary, where notable cap rate increases occurred in downtown class-A and B office buildings and low-rise apartments.

Panic hasn’t set in despite a sagging economy and real estate market spurred by depressed oil prices, according to Morassuitti.

“The wide bid/ask gap in Alberta has impacted liquidity more than pricing. Owners are under no duress and, for the most part, will not sell at discounts.”