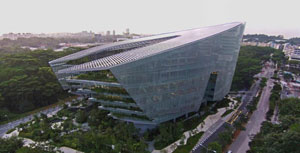 A number of Canadian premier real estate companies have gathered at the 25th edition of Le MIPIM (Le Marché International des Professionnels de l’Immobilier) to network, seek out new sources of capital, compare notes about development globally and to showcase their own projects.

Ivanhoe Cambridge, Montreal Regroupment, and Le Specialiste du Terrain are among a particularly strong contingent of participating Quebec-based companies. Last year, Montreal was one of the highlighted international cities.

Oxford ramping up in Europe

Le MIPIM is publishing a daily news magazine and the first issue included a spotlight on Oxford Properties and the firm’s European investments. Oxford has been in Europe for five years and owns $2 billion Cdn worth in property in London.  It intends to grow its European portfolio to $18 billion by 2018, or roughly 20 per cent of the company’s global business.

Oxford’s managing director Richard Pilkington told MIPIM: “The purchase of the historic Royal Exchange in the City of London at the end of 2013 was our first foray into U.K. retail and it won’t be the last; alongside European expansion and direct development, sector diversification is another key component of our growth plan.”

A new feature at this year’s event is the chance for delegates to talk publicly with experts and executives from investment companies about new strategies for real estate asset management and investments in pension funds, sovereign wealth funds and insurance companies.

The event offers 35 panels of experts, more than 80 project presentations, three “speed matchings” where developers and others can quickly network, and an awards ceremony.

One of the sessions will bring together more than 40 of the most influential pension funds and sovereign wealth funds to advise investors on making the most of their real estate portfolios. PSP Investments, one of Canada’s largest pension fund investors, is taking part alongside other funds from South Korea, Sweden, the U.S. and the U.K.

PSP currently manages $76.1 billion for clients such as the Canadian Public Service, the Canadian Forces, the RCMP and the Reserve Forces.

Brazil this year’s Country of Honour

The flavour is very much international at Le MIPIM, with approximately 20,000 participants from 80 countries and such sessions as Investing in Nordic Countries: Is it Still a Good Choice?; Brazil’s Expansion: Where are We?; and Focus on Japan.

Brazil is the 2014 Country of Honour with special networking events, a pavilion and awards specific to the country.

The photo above shows the Sandcrawler in Singapore, one of the finalists for the best office and business development award at the conference. The building was constructed by Lucas Films and is located at One Fusionopolis View.

Many of the sessions will attempt to determine what the future may hold. Delegates can sample such offerings as Workspace in Transformation: The Face of Tomorrow’s Office; Futuastructure Reprogramming: The Future of Urban Infrastructure; and Shaping the Future of the Luxury Hotel Industry.