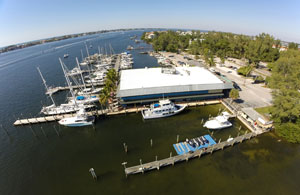 Seller Ham Jones built the marina in 1971 and added a 150-seat restaurant the next year.

“The overwhelming customer response to the original Seafood Shack led to several expansions, resulting in today’s two-storey, 650-seat restaurant,” said Jones. “For 32 of the past 42 years, our customers also delighted in boat tours of the Intracoastal Waterway aboard the 120-foot paddle-wheeler, The Showboat.”

The only Intracoastal marina

VANDYK president and chief executive officer John Vandyk is excited about what he calls “a fascinating acquisition and a game-changer” that has attracted attention from across North America.

“The Seafood Shack is the only Intracoastal marina, restaurant and bar from Tampa to Sarasota,” he said. “I look at the Intracoastal like Highway 75.”

VANDYK has hired a new dockmaster, started dock repairs and will make aesthetic enhancements to the restaurant and bar that used to serve up to 2,000 customers a day at its peak before falling upon tougher times in recent years. Vandyk said most of the existing staff has been retained and the remaining property will likely be developed further “in time.”

VANDYK is searching for a paddle-wheeler in Alabama and Mississippi to replace The Showboat, which had mechanical issues and was shut down because it wasn’t economically feasible to keep it going.

Cortez is the state’s oldest surviving fishing village and is located approximately 24 kilometres (15 miles) north of Sarasota on Florida’s Intracoastal Waterway. It was listed as an historic district on the National Registry of Historic Places in 1995.

“Cortez represents old Florida at its very best,” said Vandyk. “We are delighted to become a part of the local community and continue the legacy of the Seafood Shack Marina and Bar. This is one of the United States’ most beautiful regions and one of its most historic villages, with a cultural integrity and tradition VANDYK will preserve.”

Mississauga, Ont.-based VANDYK’s roots extend back more than three decades in designing and building custom luxury homes, commercial offices and retail developments in the Greater Toronto Area. But it has more recently expanded its operations to include developing master-planned communities with townhouses, high-rise condominiums and single-family homes.

Past developments include: Mississauga’s Brownstones on Trillium Lane, Park 570, Highgrove Towne Manors and MeadowGreen on the Park; Etobicoke’s Humberview Trails; and Brampton’s Brownstones in Olde Brampton.

VANDYK’s current projects are: Mississauga’s four-storey Windows on the Green and the 299-unit, Frank Lloyd Wright-inspired The Craftsman condo complexes; the Wyndham Place boutique condo residence in Oakville; the West Park Village planned community in Cobourg; and The Neighbourhoods of Summerhill planned community in Shelburne.

The company isn’t stopping there, however, as it has already announced a mixed use commercial and 500-unit condo development called Stonegate Plaza Lands in Etobicoke and a 250-unit infill development in Brampton’s Heart Lake area.

“We’re growing but we’re being very cautious,” said Vandyk of what he calls his vertically integrated real estate company that isn’t “pigeonholed into any one particular venue.”

Other VANDYK projects in Florida

VANDYK extended its base of operations from Ontario to western Florida two years ago, as 54-year-old Vandyk saw a southward migration of baby boomers looking to escape Canadian winters.

Seafood Shack is a solid strategic fit with the eight-condo unit ONE88 Residences overlooking Sarasota Bay that will be ready for occupancy in eight to 10 months and the Orange Club condos and townhouses in Sarasota’s historic Burns Square that will be released in less than 30 days.

“We’re looking at all opportunities, and that’s no different than what we do in the GTA,” said Vandyk of future Florida plans. “We’re not going to be building 75-storey high-rises, but boutique high-rises and infill developments.”