The Canadian economy may seem lacklustre when compared to the positive economic news coming from the United States, but in global terms it’s still in decent shape. 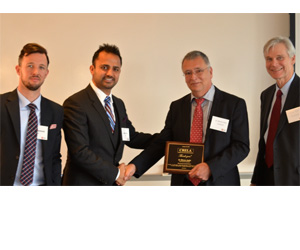 Those were the sentiments expressed by Scotiabank chief economist Dr. Warren Jestin at the second business luncheon organized by the Commercial Real Estate Lenders Association (CRELA) at JLL’s downtown Toronto office on Jan. 19.

“The things that made Canada special are still in place,” Jestin told more than 60 lenders from insurance firms, banks, credit unions and trust companies. “For example, we are at record levels of employment. But U.S. employment growth is now twice what it is in Canada.”

The American dollar is strong, interest rates are low, incomes are rising, consumers are spending more and the United States budget deficit has shrunk to about one-third of what it was five years ago. These factors are combining to attract investment and fuel what should be a sustainable three per cent annual increase in gross domestic product (GDP) in the U.S.

Economic growth in China has slowed to seven per cent, which has negatively affected commodity prices, and Saudi Arabian decisions have helped drive oil prices to below $50 a barrel. Both of these factors have hurt Canada’s economy and dropped the value of its dollar to around 83 cents U.S. GDP growth is expected to be two per cent this year, but could drop further without a recovery in oil prices to at least $60 a barrel, according to Jestin.

Ontario and B.C. growth to surpass Alberta and Saskatchewan

Alberta and Saskatchewan have led Canadian job creation and economic growth over the past two years, but Jestin said their resource-driven economies are forecast to take a back seat to Ontario and British Columbia while oil prices remain low. Jestin projects the dollar to be valued at between 83 and 87 cents U.S. by the end of 2016, which should help manufacturing and exports, but mixed signals have things in a state of flux.

“We don’t see the leverage that we normally get from good news south of the border really impacting the economy in any material way,” he said.

“Ontario benefits the most from the U.S. market relative to other provinces, but there was no province outside of Western Canada that benefited from the resource boom more than Ontario, too. Sales going west are going to tend to slow down as sales going south are going to tend to speed up, so we have a different configuration of growth across the economy. That configuration is probably going to be around for the next couple of years.

“We don’t see recession in Alberta or Saskatchewan. We think there’s going to be growth. There will be some pockets of very weak performance in the Maritimes. Quebec will not have the pick-up that Ontario has for a variety of reasons, including big debt issues. In Ontario, we have a big deficit that will be leaning against growth as well.

“B.C., in my view, is still a positive story. But if you’re thinking about B.C. beyond 2016, if there’s no LNG (liquefied natural gas), the story becomes a lot softer.”

Jestin believes the Canadian retail sector will be soft throughout 2015 because employment growth has slowed, wages will remain relatively flat and the debt to disposable income ratio is at a record high.

“We’re not going to find momentum on the consumer side the way we’ve seen in the past,” he said, adding wage stagnation will also adversely affect federal and provincial governments trying to balance their books since income tax and sales tax revenues will also remain relatively flat.

“We still live in the best country in the world and I wouldn’t trade it for anywhere,” Jestin concluded, “but these are issues on a go-forward basis.”

CRELA’s objective is to promote knowledge-sharing and networking within the commercial real estate lending community and to provide a voice for the industry on relevant matters. In addition to its quarterly themed luncheons, it will host a cocktail party in the lobby and reception area of CBC headquarters in Toronto on Feb. 24 and a golf tournament in May or June.