While the Bank of Canada suggests Canadian housing is 10 to 30 per cent overvalued and other organizations have expressed similar concerns, economist Will Dunning has used capitalization rates in his analysis to conclude prices are right around where they should be. 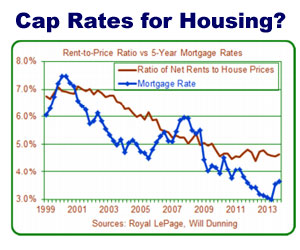 While cap rates are a common measure of the value of commercial properties, Dunning has taken data from the “Royal LePage House Price Survey” to estimate housing cap rates. By comparing “net rents” (after the deduction of operating expenses that are paid by the property owner) with the value or price of the property, he arrives at a figure.

“Over the past almost two decades, (housing) cap rates have very closely tracked interest rates,” Dunning said. “That’s a sign of the market working the way an economist would expect it to work.

“It tells me that the increase in house prices over the past decade or so has everything to do with interest rates rather than any kind of irrationality in the marketplace.”

Dunning analyzed 15 years of data in a 2014 paper titled How to Dissect a Housing Bubble. He found the gradual adjustment of cap rates occurs over six to 10 years, much less rapidly than mortgage interest rates change.

“That has two implications. One is that we could continue to see further price growth through the process of that adjustment to lower interest rates. It also means that people buying a house today and in the recent past have room to accommodate rises in interest rates.”

Canadian housing prices may be undervalued

Dunning’s paper actually concluded house prices in Canada are undervalued relative to interest rates and rents by as much as 20 per cent.

He’s quoted in the latest “The Market Manuscript” report from Fortress Real Developments as saying “prices should be roughly nine per cent higher and would need to rise as much as 25 per cent over the next several years to fully reflect falling mortgage rates.”

Actual changes in house prices depend on other important factors, including job creation, population growth, the availability of mortgage credit and the terms under which mortgage lending occurs. Supply and demand must also be considered.

“We have issues in some places in Canada because there’s not enough supply of new land available to accommodate the need to expand the housing stock that results from a growing population and growing employment,” said Dunning. “In those areas that don’t have enough land supply, they’re seeing the greatest pressure on housing prices.

This is most acute in Toronto and Vancouver, which some analysts think should be viewed separately from the rest of Canada because of their high housing demand, lack of land for new construction and chronic shortage of low-rise homes.

Dunning said the biggest risks facing the Canadian housing market are a major spike in interest rates, which he doesn’t foresee, as well as slowing job creation and federal government actions.

The Canadian government has tightened the criteria to qualify for government-backed insurance on new home mortgages over the past five years, including:

* requiring a minimum down payment of 20 per cent on non-owner-occupied properties purchased for speculation;
* reducing the maximum amortization period to 25 years from 30 years;
* lowering the maximum amount Canadians can borrow when refinancing to 80 per cent from 85 per cent of the value of their homes;
* and limiting availability to homes with a purchase price of less than $1 million.

“In a lot of places in Canada, those policies have been premature and counter-productive to what the action should be in the marketplace,” said Dunning.

“The policies have acted to impair housing activity when there really wasn’t a justifiable reason to do it.”