Germany leads Europe in population and gross domestic product (GDP) by significant amounts, and Canadian-based real estate investors have been increasing their stakes in the economic powerhouse since the beginning of the decade. 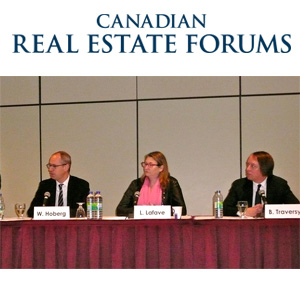 Canada Pension Plan Investment Board (CPPIB), Healthcare of Ontario Pension Plan (HOOPP) and Dream Global REIT (DRG.UN-T) are three prominent investors and their representatives were on hand to discuss their German involvement at the Global Property Market at the Metro Toronto Convention Centre on Tuesday.

“It’s not easy to drop in from Toronto and understand the market in a couple of days,” said CPPIB managing director of European real estate investments Wenzel Hoberg.

Germany is more decentralized than London-focused England or Paris-centric France. The population is more spread out than in most European countries and Germany’s seven largest cities represent just 12 per cent of its population.

Dream Global REIT jumped into the German real estate market with both feet in 2011.

“Transaction volume was down and there weren’t that many buyers in the market,” head of investments Bruce Traversy said.

“German buyers, which had always been big buyers of German real estate, were not as active. There were a lot of open-ended funds that had closed.”

Dream seized the opportunity and bought about 300 office properties spread across Germany for approximately 750 million euros ($1.1 billion). It has since tripled its portfolio by purchasing about 1.5 billion euros worth of additional properties, while also selling about 100 assets.

It now has multiple properties in Germany’s seven biggest cities and representation in the 30 largest markets. Dream has brought local expertise in house and has about 60 employees in six offices in Germany and Luxembourg.

CPPIB’s first large-scale investment was a shopping centre near Cologne it bought from a German fund which it recently sold.  It had previously picked up a 50 per cent interest in the blue-chip CentrO shopping centre in Oberhausen where Unibail-Rodamco owns the other half.

It’s pursuing other joint venture projects with Unibail-Rodamco, the second largest retail REIT in the world and the largest in Europe, to grow its German real estate platform.

HOOPP has been investing in the German logistics sector for four years, continuing the same commitment it has to North American industrial properties. It has seven buildings either completed or under construction outside of cities but close to road and rail nodes that are part of Germany’s solid infrastructure.

“The focus is on build-to-suit for tenants because we’re finding a lot of the stock is obsolete,” said HOOPP senior portfolio manager Lisa Lafave. “Less than 10 per cent of the stock is younger than 30 years old, so there’s a huge demand for modern facilities, which is what we’ve been focused on.”

Traditionally risk-averse German investors are developing more of an appetite for unpredictability, according to Hoberg, as witnessed by a gradual move out of tried-and-true core real estate and increased interest in more plentiful value-add and core-plus properties.

Increased development has taken place in Berlin over the past few years, as it’s one of the few German cities with much space to permit it. Residential prices are increasing faster than office prices, so more residential building is taking place — largely driven by high levels of cheap debt.

CPPIB is investing in Germany for diversification purposes and is focused on large-scale regional malls, which are somewhat of an outlier in the more high street retail-driven country. The biggest shopping centres in the former West Germany were built in the 1970s and in the former East Germany after unification in the ’90s. There has been little mall construction since.

“There’s a very constrained supply of shopping centres, but you can keep expanding existing ones so that their position gets better and more dominant over time,” said Hoberg.

“Other markets in Europe have no constraints on shopping centre development and therefore you always need to be the bigger, better and more dominant one.”