Canadian shopping malls some of the most productive in North America

Canadian malls earned five of the 10 spots on North America’s Most Productive Shopping Centres in 2013 list. Not only that, but Vancouver and Toronto were the only cities to place two malls apiece on the Retail Insider list. 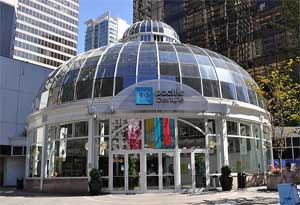 In Canada, Vancouver’s Pacific Centre is king, at $1,335 Cdn per square foot for sales. Toronto’s Yorkdale Shopping Centre is hot on its heels, though, at $1,300 per sq. ft.

And according to Retail Insider, Yorkdale is poised to become North America’s top-selling mall by 2018 with forecasts of $2 billion by 2018, nearly doubling its current annual retail sales figures.

Pacific Centre and Yorkdale ranked fourth and fifth, respectively, on the top 10 list.

Pacific Centre was No. 1 on the top 10 list in 2012, while Eaton Centre and Yorkdale ranked third and fourth, overall.

The Retail Insider speculated that Chinook Centre and Pacific Centre could join Yorkdale as Canadian malls to top the $1-billion mark in annual sales in the next few years. Both centres will also feature Nordstroms as anchor tenants.

Construction is well underway on the Pacific Centre redevelopment. The Cadillac Fairview-owned site is undergoing a multi-million renovation that will accommodate Nordstrom on three floors, encompassing 230,000 sq. ft. The top four levels of the building will be converted to 280,000 sq. ft. of AAA class office space.

Oakridge Centre could move up

The Ivanhoe Cambridge-owned Oakridge Centre could also move up the list in the futue. It recently received Vancouver city council approval for a massive expansion that will see the centre double in size to 1.365 million sq. ft., according to the Retail Insider.

The $1.5 billion expansion will include 14 residential towers between nine and 44 stories. The residential component will house an estimated 6,200 in more than 2,900 units.

The Retail Insider speculated that some lower per-square-foot sales numbers for many of the malls may have been the result of the 2013 data numbers being either independently researched or sourced from the mall landlords. In 2012, the Retail Insider’s numbers had been provided by KPMG.

The Retail Insider plans to update its top 10 list at the end of the year in order to determine if an increase in online shopping is impacting bricks-and-mortar operations.