The redevelopment of Toronto’s Canary District property, which is 95 cent complete, will be turned over on time and on budget from Dundee Kilmer Developments Limited to the 2015 Pan Am/Parapan Am Games organizing committee in February. (Part 1: Canary District ready 10 months ahead of Pan Am Games)

Part 1: Canary District ready 10 months ahead of Pan Am Games 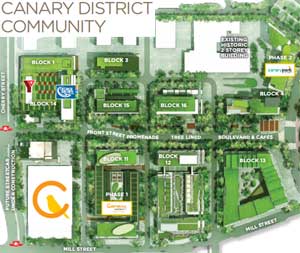 The property, whose redevelopment  began in earnest in 2001, has involved a range of stakeholders, including The City of Toronto, Waterfront Toronto, Infrastructure Ontario and local community groups.

“The model that Infrastructure Ontario has developed for the Pan Am Games athletes’ village is certainly replicatable for any other large-scale events that the City of Toronto chooses to host,” said Kilmer Group vice-chairman Ken Tanenbaum.

Tanenbaum said there weren’t concerns Canary District would encounter similar problems to what plagued the athletes’ village built for the Vancouver 2010 Winter Olympics, where the West Coast city ended up being owed hundreds of millions of dollars that it lent to Millennium Development Corp. to ensure it was finished on time.

The city took over financing the village construction after Millennium’s original lender refused to continue making payments due to cost overruns.

The City of Vancouver sold the land for the athletes’ village to Millennium in 2006 for $200 million, but received only $29 million as a down payment. The project later went into receivership and the city was forced to sell the village’s condos through shell companies for much less than originally projected.

Dozens of condo owners filed a class-action lawsuit demanding their money back after complaints about the workmanship in their homes. The city also lost rental income during delays in finding building operators for the village’s social housing rental units that were built using new environmental technologies.

“I think Infrastructure Ontario, to its credit, did a tremendous amount of homework on the failures of not just Vancouver but other athletes’ villages around the world that have been bogged down by delays or cost overruns,” said Tanenbaum. “There’s a model here for the delivery of complex projects that Infrastructure Ontario should be commended for, and it represents an opportunity to export that knowledge to other jurisdictions that are hosting large, complex games.

“The lessons learned are many, and I can speak to a few of them. Having properly capitalized developers is the first important lesson. This project also had a construction team with enough skin in the game to ensure on-time deliveries. Infrastructure Ontario found that right balance in terms of at-risk equities to ensure that things were delivered on time.

“Another large thing is around building systems. There was no pioneering of new systems. Vancouver did a lot of first-time implementation of systems and, while we’re LEED Gold-certified as a community here, we’ve used tried and true building systems.”

When Dundee Kilmer is returned control of the project after the Pan Am Games, housing will be comprised of: 810 market units, including townhomes and loft units; 253 units of affordable housing, including two-storey maisonettes and one- and two-storey apartments; and a George Brown College residence that will accommodate 500 students.