Canderel holding its own amid Toronto office boom

Privately owned real estate company Canderel is best-known in its home market of Montreal, where more than three-quarters of its 9.8-million-square-foot portfolio is located. 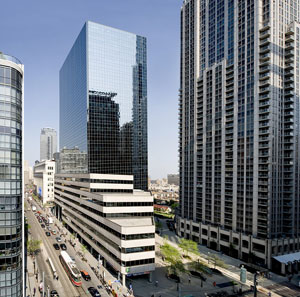 It is also a player in the hot Toronto market, where it has nearly two million square feet of properties and has been performing well despite hectic office development in the downtown core.

Canderel owes some of its Toronto success to the fact its office properties are more midtown than downtown. Those holdings include the 30-storey tower at 777 Bay St. and the 13-storey 1075 Bay St. (both co-owned with pension fund partners).

“There has been a lot of construction, new product . . . and the flight to quality and tenants from the suburbs looking to come downtown because that is where the new employee base is with all the condo,” said Michael Vilner, vice-president of leasing and development with Canderel in Toronto.

“Not up against the new stock”

“We are not up against the new stock. The downtown north tenants are not the ones going into the new stock. It has really been a big shuffle downtown, the insurance companies, the financials, the law firms, they are the ones coming out of the older bank towers and going into those. We don’t really compete with that.”

That does not mean the company is immune to market forces, Vilner added.

“It is a competitive market, everyone is throwing everything they can at tenants,” he said. “At the end of the day, it comes down to obviously where the tenant feels most comfortable – what works best from a planning perspective – so efficient space and efficient buildings work well, and amenities and parking and subway connection.

“Has it been a grind? Yes, at times, when you are competing with some landlords who are willing to throw everything including the kitchen sink at tenants just to fill up space.”

Canderel last month announced it had signed a lease with McKesson Canada for its building at 6355 Viscount, in Mississauga’s Airport Area.

Canderel purchased 6355 Viscount, a three-storey 75,000-square-foot office building located one block from Pearson International Airport two years ago in a sale-leaseback. The seller was Sobeys Ltd., which utilized the property as a regional office.

The company acquired the property with the knowledge it would need to find a new tenant in two years time. “We knew they were leaving the building this coming summer so it was a challenge,” Vilner said of the company’s only holding in the airport area.

“That market is depressed. I heard following our announcement that there are going to be a couple of other deals done in the Mississauga airport area, but it is a challenge out there.”

Canderal’s advantages was “we had a unique asset, which helped us.” In the case of the Viscount property, it has one of the largest parking ratios in the GTA.

“It also has future expansion opportunities for McKesson down the road and it is a stone’s throw from the airport for the business traveler and the future Union-Pearson (Airport) link,” Vilner said. “So our location helped as well.”

Beyond owning and operating office space, Canderel has also earned a reputation as a mixed-used developer and has done its share of development in downtown Toronto.

This week, the company was honoured at the 35th Annual BILD Awards for Project of the Year (High Rise) award for its sales success with YC Condos.

Co-developed by KingSett Capital, the 66-storey YC Condos tower is located at Yonge and Grenville. It joins Canderel’s College Park 1 & 2 and Aura, Canada’s tallest condo, in transforming the historic College Park Neighbourhood into one of the city’s most enviable new communities. The company has also done some condo developments on King St. West.

A new Beer Store pad site location is scheduled to open at 150 Holiday Inn this summer.