“Wait and see” seems to be the catch phrase in Alberta real estate circles these days,  as companies try to get a handle on how big an impact this year’s drop in oil prices will have on the market. 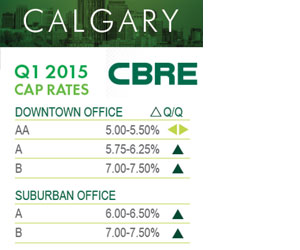 “Things are a little bit quiet here on the leasing front and the investment front,” said Garry Beres, executive vice-president for CBRE in Calgary.

An increase in unemployment brought about by the downsizing of energy companies is being most felt where their headquarters are located in Calgary, which is experiencing an increase in the amount of available office space. The vacancy rate rose to 11 per cent in the first quarter of this year from 8.5 per cent in the previous quarter.

The absorption of vacant office space had already begun to slow at the end of 2014 and is expected to decrease further in 2015.

“There’s definitely been a lack of overall transactions in all sectors, but it’s more pronounced in the downtown office sector,” said Colliers International Calgary managing director Laurel Edwards, who believes rental rates will decrease due to increased office space availability.

Capitalization rates for downtown office space remained stable and ranged from 5.5 to 6.25 per cent for class-A properties and rose to from 6.5 to seven per cent for class-B buildings, according to Colliers International’s recently released first quarter cap rate report for Calgary.

“Probably for all sectors, but definitely for downtown office, we were starting out at historic cap rate lows,” said Edwards. “So the cap rates that we’re stating here are considered to be quite low and have been there for a while.

“So while we might see some lift in some of the categories, even stabilizing at these rates still indicates a strong market.”

CBRE’s Beres said a lack of availability has slowed down office building investment in the suburbs.

“If there was a good quality suburban building, there would still be interest in it given that it’s not likely to have a lot of exposure to the energy industry. The only exposure in the suburbs is the engineering companies, which are being affected somewhat with the energy business doing what it’s doing.”

The industrial, retail and multi-residential asset classes are expected to continue to perform strongly and draw investor interest throughout the year, with rental rates and overall demand expected to remain stable — particularly for high-quality, well-located properties.

Cap rates are forecast to remain stable throughout 2015, which is considered to be positive based on how low they’ve been for the past year.

Cap rates for class-A industrial properties rose slightly to a range of 5.5 to six per cent, while the rates for class-B have bumped up to from 6.5 to seven per cent, according to CBRE’s recently released “Canadian Cap Rates & Investment Insights” report for the first quarter.

Cap rates for the retail sector were steady across the board and varied from 5.25 to six per cent for regional malls and power centres, from 5.5 to 6.25 per cent for the community category, and from six to 6.75 per cent for strip malls, according to Colliers’ report.

“Population growth has subsided somewhat, but there’s still a need for retail and apartments,” said Beres. “In fact, one could argue that the apartment rental side benefits from this downturn because people defer decisions to buy and instead they rent.” 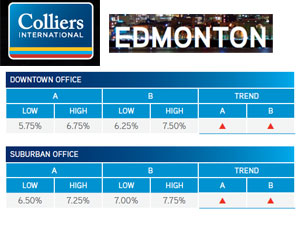 Real estate investment was quiet for the first three months of 2015 in Edmonton, and new construction will add a sizable amount of office space to the market in the coming months.

“It gives a lot of existing tenants in the Edmonton office community lots of opportunities to go out and acquire new space, expand and move around,” said Colliers Edmonton managing director Andrew MacLeod. “Those opportunities haven’t always been available in Edmonton because there were so few large spaces available to move into.

“That was a significant factor that was ultimately going to put downward pressure on rents and increase vacancies. We’re forecasting that to have an effect on cap rates in Edmonton.”

Edmonton’s industrial cap rates remained steady, with Colliers reporting a variance of from 5.75 to 6.5 per cent for single-tenant A properties and from six to seven per cent for multi-tenant B buildings.

“We still feel that there would be a significant amount of demand for a stable class-A industrial asset in Edmonton, but like all asset classes in Edmonton, there’s not a lot of good quality assets available,” said MacLeod.

There has been strong growth in multi-residential rental rates and an accompanying decrease in vacancies in Edmonton in recent years, and growing demand has meant a few significant rental properties are either planned or underway. They’ll add to the supply of high-end, high-rise buildings, of which the city has a shortage.

Retail vacancy in Edmonton is less than two per cent and strip centres continue to be highly sought-after properties, as rental rates remain high.

“Retail shopping centres have performed the most consistently for the past few years,” said MacLeod. “That was largely a result of a retail market that was quite underbuilt in Edmonton for a number of years, and what was also fuelling it was the absolute high demand for U.S. and other international retailers to move into the Edmonton marketplace.”