Canada’s largest real estate services firm is turning to a familiar figure to lead the way in 2014. 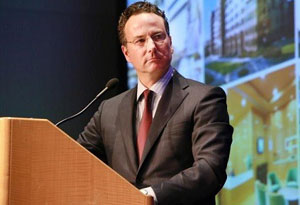 President and CEO Mark Renzoni, who has spent his entire 25-year career at CBRE Ltd., moved up from the No. 2 slot of chief operating officer at the start of the year. He expects favourable tailwinds should provide the firm with solid results in his first year as CEO and beyond.

“If the U.S. is growing and a lower Canadian dollar is in place, making us more competitive, then we are going to reach another level of growth in Canada and pull out of this sluggishness,” he said. “We’re very positive on where we see the U.S. is going and its impact on Canada.

Already the largest real estate services firm in the country with about 2,000 employees and 22 locations, the firm’s new chief executive expects that organic growth will provide a boost to its Canadian footprint. That means getting existing customers to expand the palate of services they purchase from CBRE as well as winning new business either on its own or thanks to relationships with the U.S. parent.

“The big opportunities are first around our core markets, looking at our service offering, additional complementary services,” he said. He singled out CBRE’s division which services the hotel sector, expanding its mortgage brokerage business nationally and its project management business as high growth areas for the current year and beyond.

“Our core businesses also have lots of runway to expand.”

Renzoni expects that CBRE can add two or three offices over the next year and add another 150 to 200 people over the next 18 months. “And if there was a significant new account into our global corporate service business, that could bring a couple hundred people all at once as well.”

CBRE should enjoy some business expansion just by virtue of its status as part of a global giant. A “seamless” border means that the Canadian unit can win work from south of the 49th parallel and overseas. “There is so much movement between Canada and the U.S. with our corporate clients. On best practices, benchmarking, all of our service lines.”

The C-suite transition at CBRE in Canada should be extremely smooth as former CEO Stefan Ciotlos has stepped out of the CEO role and taken a senior advisory role that carries the title of executive vice-president of special projects, working out of the Toronto head office.

Essentially, his new job is to propel growth at the company “around acquisitions, special projects with regards to our service lines,” said Renzoni. “Stefan and I will be working very closely on our growth strategy.”

The two men are friends and fellow CBRE veterans, having moved up the ranks through increasingly responsible roles.

“As friends and as partners, this is probably one of the better transitions that anyone can imagine,” Renzoni said. “We are very much on the same page on every aspect of our growth strategy.”

Renzoni was appointed COO  in 2012 where he focused on developing CBRE’s corporate and financial strategy as well as coordinating client relationships across Canada. He began his career in CBRE’s office leasing division and became managing director of the Toronto West office before moving to the Toronto Downtown office in 2000 as executive managing director.

In 2008, he moved to Vancouver to lead CBRE’s operations in British Columbia, which he continued to manage while serving as COO.

Ciotlos said in a statement that stepping out of the CEO role after a five-year run, “will allow me to spend more time with my family.

“It was a great privilege to lead CBRE’s efforts in Canada for the past five years,” he  said. “I am amazed at how our service lines have grown and diversified in my 28 years with the company. I take great pride in all that we have accomplished . . .”