The energy-dependent Western half of the country may be suffering from slumping energy prices and the East is yet to feel the export tailwind from a lower loonie, but that doesn’t faze CBRE Hotels’ dealmakers who have seen first-hand an increase in activity across the country. 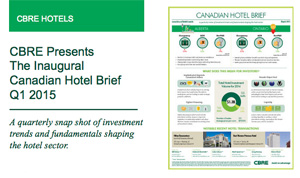 CBRE, which calculated dealmaking in the hotel sector accounted for 211 trades and $1.3 billion worth of assets changing hands in 2014, predicts a similar amount of deals this year with the total value reaching as high as $2 billion.

“I think the transaction volume will be higher in terms of dollars, but I think I would see probably relatively comparable number of trades,” Stone said. “We do anticipate some larger transactions taking place that skew the total transaction volume.”

The anticipated $1.5 billion to $2 billion target for 2015 would also translate into  higher average price per rooms, which last year totalled $97,000.

“I am just really encouraged by the pace of activity this year. We really do think it is going to be a banner year for transaction activity.”

Last year, Western Canada punched above its weight, accounting for 39 per cent of deal volume, while Central Canada made up 56% of deals and Atlantic Canada came in at five per cent.

Stone does not see the balance shifting dramatically eastward as many would assume, given the energy shocks Alberta and Saskatchewan in particular are currently suffering.

“I think there are opportunities and the market was pretty overheated,” he said of Western Canada’s hotel sector. “I’m not sure that pricing has come down a whole lot. I just think that it has made the availability of hotel product that much greater.

“To date, we have not seen distress in the market, so it is just an opportunity for people to get in where they may not have been able to buy before.”

He is hesitant to predict just how much hotel properties will come down in slumping markets such as Alberta, given how valuations are market- and property-specific. “The difference between an oil market and a gas market in Alberta could be substantial.”

Alberta was a busy place for deals in 2014 and Stone expects “they will come close” to last year’s tally in 2015. “It is early days right now, but I know what we are involved with right now and so I’m optimistic.”

That’s even in the face of a “tighter financing environment” for Alberta in CBRE’s estimation. “I think lenders in this market still will back quality sponsorship, experienced groups, hotels that have a decent amount of equity going in the deal. . . . And track record is key.”

Stone added he was meeting with a lender group this week that is looking to finance a new hotel development in Alberta. The prospective project is winding its way through the approval process. “Business is still going on, again backing skilled sponsorship.”

Potential buyers in the West are also not expecting oil at $50 a barrel to be a long-term reality with a bounceback in prices coming sooner rather than later. “Absolutely. With the commitments that we are seeing by investors into the market, I think that that is what they are anticipating.”

Conditions are improving in Eastern heavyweights Ontario and Quebec, given the benefits of lower energy input prices for businesses and consumers, a low dollar for exporters and the currency rebalancing that translates into cheap northern adventures for Canadian tourists, Stone said.

“You are seeing it on the manufacturing side and certainly on the export side,” he said. “The number of inbound travellers from the U.S. is up quite a bit and of course the number of Canadians going south has been reduced.”

That’s good news for Eastern hoteliers and hotel valuations. “The dollar is low enough that it is really meaningful” to spur tourism.

One wildcard for 2015 occupancy rates, slated “for a decent increase” is the Pan Am Games which take place in the Toronto market in July. That could scare off potential visitors who expect traffic chaos or difficulty finding rooms during that time.

The East’s renewal, and Ontario in particular, will result in more hotels changing hands in 2015. “We are seeing an enormous amount of activity in the market.”

CBRE has already been involved in two “significant” deals in downtown Toronto (the Fairmount Royal York purchased by KingSett Real Estate Growth LP and InnVest REIT from Ivanhoe Cambridge, and the 342-room Best Western Primrose at Jarvis and Carlton). Stone said CBRE is currently in the midst of seven other possible deals in the GTA.

“It has been a steady stream with the Park Hyatt in Toronto, the Hotel Vancouver, the Hyatt Vancouver, the Royal York. We do anticipate more of these transactions.”

Comparing the Alberta and Ontario markets in its first-quarter report, CBRE tells a tale of two very different markets.

So just who is selling? It’s a mixed lot, it turns out.

“You have got institutional sellers that are getting out of the sector,” said Stone. “You have private sellers who are a little bit more opportunistic, where it is just simply time. You have public companies that are strategic and are moving to an asset-light strategy and are selling but keeping management.

“We are dealing with a number of owners that are estate planning.”