Paul Morassutti had an armful of gloomy tidings to share with the audience of real estate professionals at the 2015 RealCapital Conference in Toronto this week. 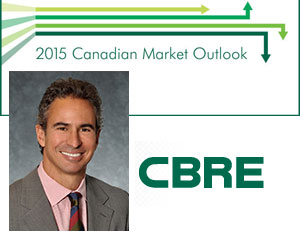 Morassutti, executive vice-president and executive managing director of valuation and advisory services with CBRE Ltd., kicked off his talk by telling participants the good times since the financial crisis look to be over. “Since 2010, as we came out of the last recession, the Canadian industry has been spoiled with market fundamentals and capital tightly aligned and overall conditions about as good as they can get.

“We’re now beginning to see these two hemispheres decoupling and quite frankly it is a little nerve-racking.”

What it all means

The CBRE exec said the ripples have shown up on the buy side, where players are more cautious, cap rates are diverging, demand for super prime assets looks to be “insatiable” and returns have dipped with scarcity. The rush to the best, safest real estate assets is not just a Canadian trend, but is global, he added.

Buyers have become extremely discerning when it comes to assets that “have any sort of leasing or market risk attached to them and in uncertain times this divide only widens.”

Pension funds are also not getting into the game like they should be, based on their capital allocation targets: those allocations average  12 per cent according to a recent report, off from the target allocation of 12.8%. That may seem like a rounding error until you do the math on hundreds of billions in fund assets. The shortfall works out to $4.5 billion, CBRE estimates.

“Given the paltry returns associated with fixed income, it seems likely that these allocations will if anything increase to ensure the plans remain adequately funded.”

REITs are in good shape, especially in the ultra-ultra low rate environment, and are expected to continue to be selective buyers this year.

Private investors, the dominant buyers in 2014, are expected to remain hungry this year.

The prospect of rising rates, viewed as the greatest threat to the real estate sector, looks to be “off the table,” perhaps for years, he said.

Upbeat about rates, Morassutti was much gloomier about “less rosy” market fundamentals “and the centre of the storm is unfortunately Alberta.”

The “incredibly cyclical” energy market has hammered Calgary office in particular, which can be seen in weakened demand and imminent supply, followed by Edmonton for different reasons.

“It is going to be a very tough year to be a landlord in Calgary, where approximately 60% of tenants are energy-related,” he said. “But let’s keep this is perspective. First of all, we have been down this road before, six times in the last 30 years to be precise, which an average decline each time of 54%.”

What will put something of a floor under Calgary office is the fact many multi-billion energy investments are too large and complicated to simply stop and there is breathing space is there in that most new buildings will not be ready until 2016.

Edmonton, meanwhile, has its own unique supply issues (modest annual demand) “that will take years to work through,” he explained.

“While there does tend to be a tendency to always default to an Armageddon scenario, what we are currently seeing in the oil patch is a slowing of momentum rather than a dead stop. Outside of Alberta, the biggest threat to the office markets is economic contagion and the resulting impact on job growth, demand and overall confidence.

“Office fundamentals are further complicated by the ongoing drive towards space compression.”

It goes beyond “squeezing the size of pews” to “fundamentally how the nature of work is evolving.” He cites a CBRE international study that found workers spend less than 50% of their time working away at their desk. So half their time is spent independently, while the other 50% of the time is spent working with others.

“Aggressive digitization” also allowed paper to shrink from 1,500 file drawers to just 300 today. “Employee satisfaction, by the way, is through the roof.”

“The new office buildings are filling up because the math works for the tenants and it allows them to establish these new workplace standards.”

That will put pressure on older inventory. “The challenge to the older buildings is obvious. Whether it is price point, renovation or innovation, older buildings need to respond to these changes.”

The best test cases are happening in real time in Canada’s largest office market. “The legacy=A buildings in Toronto are excellent examples of how spending capital can effect change and competitiveness. The alternative is to become a pure price play option in a slow spiral down in tenant quality, relative rent levels and increasing vacancies.”

Leasing activity data for downtown Toronto backs Morassutti’s case: in pre-leasing activity from the last round of development, tenants expanded by 31%. In the current cycle, however, they are giving up more space than they are taking.

“If you factor this trend into weakening supply in general, and new supply deliveries, you have a recipe for a sector that – without an expanding economy – that will see rising vacancies and downward pressure on rental rates.”

* The Target miss “was entirely a Target problem and in no way should be misconstrued as an indictment of the Canadian retail landscape.”
* E-commerce is real and not going away. “… digital has converged with physical. Retailers with bricks and mortar locations are already starting to use their stores as mini fulfillment centres.”
* Retail is merging into industrial as ecommerce makes supply chain more important.
* Reshoring of manufacturing and a low Canadian dollar could dramatically boost industrial sector “as we get back to actually making what we consume.”
* Multi-family remains “the perfect child: no traumas, good fundamentals, favourable migration and immigration patterns, and continued affordability concerns in the housing market.” The only questionable region for rental growth is Alberta and the question of a prolonged period of low oil prices.