CHC Realty Capital Corp. (CHC-X) has entered into an arm’s length agreement to acquire a 17-storey apartment building in London, Ont., for $55 million to add to its portfolio of student residences. 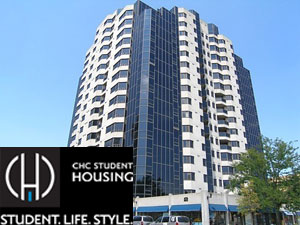 The downtown property at 675 Richmond St. is about two kilometres from Western University. The building, which has 368 beds in 187 apartments as well as 1,138 square metres (12,642 square feet) of commercial space, was built in 1998 and is undergoing renovations which are scheduled to be completed next year. It’s approximately 84-per cent occupied, including vacant units under renovation.

Average monthly rents for the property are approximately $1,670 per unit, and it generates annual effective gross income of about $3.8 million. CHC expects first year net operating income of approximately $2.75 million.

The vendor of the property, Kanco-673 Richmond Ltd. and Kanco-675 Richmond Ltd. collectively, is arm’s length to CHC. The deal is expected to close by Nov. 17 and the vendor has agreed to pay CHC an income guarantee on monthly gross rental income from the property based on 96 per cent occupancy for one year from the closing date.

“675 Richmond is a trophy asset which we are pleased to be able to acquire for CHC’s student housing business,” says CHC president and chief executive officer Mark Hansen. “It is an institutional-quality building located close to one of Canada’s pre-eminent universities and is in the heart of downtown London, where students want to live.

“Although it has been rented mainly to students to date, it has still been run as a traditional apartment building and we believe that we can add value by focusing the building solely on student rental. Following the acquisition, we intend to implement a student-oriented marketing and operations strategy, including adding additional beds, furnishing all units to appeal to students, adopting new leasing strategies, improving active property management and executing upon other value-added plans with the objective of growing net operating income.

“Although we are continuing to evaluate CHC’s plans for the property post-acquisition, we are confident that a student housing strategy for the building will lead to improved performance and increased value.”

In connection with the acquisition, CHC intends to complete a brokered private placement to raise a minimum of $8.15 million and a maximum of $10.85 million through the issuance of a minimum of 74,090,910 units and a maximum of 98,636,364 units at a price of 11 cents per unit. Each unit will consist of one common share and one-half of one common share purchase warrant of the company.

Each whole warrant will be exercisable to acquire one common share of the company at an exercise price of 13 cents per share for a period of 24 months from issuance. The placement will be conducted by a syndicate of agents led by Raymond James Ltd.

Net proceeds to be used for property acquisition

The net proceeds of the private placement will be used for the acquisition of the property, together with:

* A first mortgage on the property from GE Canada Real Estate in the amount of $33 million, bearing interest at the three-month banker’s acceptance rate plus 2.15 per cent (currently 3.37 per cent) per annum, maturing in three years from closing and payable with respect to interest only;

* An additional first mortgage on the property from GE Capital Real Estate in the amount of $5.5 million, bearing interest at the rate of six per cent per annum, maturing in one year from closing and payable with respect to interest only;

* And a second mortgage on the property from Timbercreek Mortgage Investment Corporation in the amount of $8.25 million, bearing interest at the rate of 12 per cent per annum for the first six months and increasing to 14 per cent thereafter, maturing seven months from closing and payable with respect to interest only.

If CHC doesn’t raise the maximum proceeds under the private placement, it will satisfy any balance of the property purchase price through a credit facility from Timbercreek in an amount up to $2.5 million, bearing interest at the rate of 14 per cent per annum for the first six months and increasing to 18 per cent thereafter, maturing seven months from closing and payable with respect to interest only.

Toronto-based CHC owns and operates student housing and is focused on acquiring high-quality properties in close proximity to universities and colleges in Canadian markets. It began trading on the Toronto Stock Exchange in January, becoming Canada’s first public company focused on student housing.

CHC acquired the two-building Luxe in Waterloo, Ont., located near both Wilfrid Laurier University and the University of Waterloo, last year. Those buildings house 954 beds in furnished
suites and also include a movie theatre, fitness and yoga studios, and a games room.