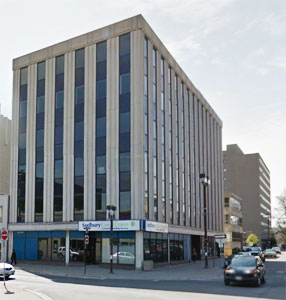 The newest acquisition meets what CHC president and CEO Mark Hansen describes as the company’s criteria of acquiring “high-quality assets in close proximity to a university in a proven market” and represents another move in its “growth plan to become the leading provider of student housing across Canada.”

The 28,965-square-foot, six-storey office building, purchased for $5.5 million is located at 50 Lisgar St. in the city’s downtown. The building includes 70 beds in 50 student apartments, along with 4,500 sq. ft. of main floor commercial space (Image 0f 50 Lisgar from Google street view).

“We think Sudbury is a great market,” Hansen said. “We think it’s one that’s overlooked by a lot of people. There’s a great school up there, strong student population, growing – a market we thought we wanted to be in.”

Laurentian University is described as a bilingual, tricultural institution, offering English and French, as well as Aboriginal services for its more than 175 undergraduate and graduate programs. It is also home to the Northern Ontario School of Medicine.

Besides the university, Sudbury is also home to Cambrian College, offering more than 90 full-time programs and more than 800 part-time programs, and the French-language Collège Boréal.

Maureen Luoma, executive director of Downtown Sudbury, has said student housing is a natural fit with the planned development of the core with its arts and culture centre, dining, and music.

“We hope that we’re going to be able to do some other deals down there,” Hansen told the Sudbury Star. “We love the Sudbury market and we think it’s one that definitely holds a lot of future potential.”

The Sudbury acquisition is just the next step in CHC’s continued growth into student housing. Earlier this year, the company announced it had entered into an agreement to spend $2.5 million to acquire an 18-bed property called Liberty Terrace near Queen’s University in Kingston,  that also included 1,108 sq. ft. of ground floor commercial space.

In 2013, it acquired the two-building The Luxe in Waterloo, located near both Wilfred Laurier University and the University of Waterloo. Containing a total of 954 beds The Luxe’s furnished suites are complimented by a movie theatre, fitness and yoga studios and a games room.

The company’s growth model for acquiring new properties includes a stable and secure cash flow and a strong local manager. In the case of the Sudbury acquisition, the announcement noted CHC “plans to enter into property management arrangements with a third party property management service provider.”

The company had said earlier that at an appropriate time it would consider conversion to a REIT, a move that would make CHC the first Canadian REIT catering to the demand for student housing.