CIBT Education Group recently announced its second  building acquisition in the Greater Vancouver  in a month and one of several this year aimed at providing “student centric serviced apartments.” 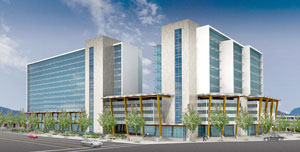 Both projects will target domestic and foreign students studying in the Lower Mainland and both are within easy access of a SkyTrain station.

In January, CIBT had announced GEC signed a memorandum of understanding with a Vancouver developer to establish student housing projects in Vancouver and Richmond named GEC Langaga and GEC Capstan. The aggregate development for the two projects had been established at $48 million. (Shown in the picture.)

At the time, it was reported that CIBT had plans for three developments in Richmond and Vancouver with possible deals on three more sites.

Business in Vancouver identified the Vancouver developer as New Continental Developments Inc. and Ming Liang Holdings Ltd., who were expected to “develop the three initial projects on a build-to-suit basis. CIBT subsidiary Global Education City Holdings Inc. would acquire the properties on completion.” There has been no confirmation the same developer is involved with the latest projects.

The largest of the three development projects announced in January would include a proposed “two towers, one with 300 residential units and the other hosting educational space” with another “two towers planned for sites near the Capstan Way and Langara rapid transit stations.”

Toby Chu, president, chief executive officer and vice chairman of CIBT Education Group Inc., said the need for quality properties would only increase with Ottawa’s ambitions to increase the presence of foreign students in Canada.

“We’ve been dealing with homestays for foreign students for the past 20 years, and it’s becoming more and more problematic,” he told Business in Vancouver. “It’s become so expensive . . . and the quality . . . has been deteriorating because the supply is running dry. . . . People buy a house, then carve it up from four rooms to 10 rooms. It just looks terrible.”

“We have been working with international students from 42 countries and owning a large number of schools in three continents for 20 years. We have learned many important priorities from parents sending their children to study abroad,” Chu said in a media release.

“The quality of home-stay families, security issues, safety concerns when commuting to and from school, as well as proper meal plans and weekend activities are some of the many concerns of students’ parents,” he said in the media release.

“Armed with this knowledge and experience, CIBT Group is in an excellent position to address these concerns by establishing a network of high quality, clean and safe serviced apartments and student hotels for students coming to study in Vancouver, thereby eliminating the worries for parents.”

CIBT’s website says “Through GEA’s partnership arrangement with various schools, as well as CIBT Group’s wholly owned subsidiary schools in Canada and Asia, CIBT Group has access to more than 20,000 international students studying in Vancouver, each paying approximately $10 – $12,000 per year for their housing needs, totaling over $200 million in housing revenue per year.”

It adds, “CIBT Group’s integrated strategy is to create a global recruitment platform and pipeline to attract international students to study in North America while utilizing CIBT’s international housing division as part of the enhanced strategy to attract foreign students to pursue world class education in Canada coupled with a safe, secure and comfortable living experience in Vancouver.”

“According to statistic and government data, we foresee the growth of the foreign student market as substantial,” Chu said in a January media release. “We feel that our initial three projects including the GEC Education Super Center in Richmond, GEC Capstan and GEC Langara can only supply a small fraction of a significant demand.”

He forecasted the recent transactions: “CIBT Group is now actively pursuing a number of new GEC locations along the Vancouver SkyTrain route in the Greater Vancouver area. Our initial plan is to build student housing to accommodate 1,400 foreign students which will serve less than 1.4 per cent of the total foreign student population in Vancouver.”