In one of the more unusual transactions of the year, The City of New Westminster has sold an office building it developed on spec. 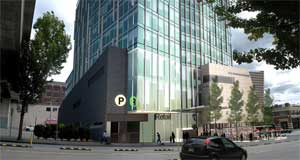 Merchant Square is a nine-storey, 137,000-square-foot class-A office tower being built as part of the city’s Anvil Centre project and aiming for LEED Gold.

The city views the Anvil Centre’s multi-use facility and the office building as a key component of the downtown revitalization plan.

According to The New Westminster News Leader, the Uptown Property Group backed away from a potential partnership with the city in 2011 that would have seen them build the office complex. Unable to find a replacement partner, the city made the controversial decision to proceed with the project.

“When we made the decision to pursue office tower construction in 2012, we did so knowing the many benefits this project would bring to the city,” the News Leader quoted Mayor Wayne Wright at the time.

The City of New Westminster announced in early March that 777 Columbia had purchased the building for $36.5 million.

Under the purchase agreement, 777 Columbia assumes responsibility for tenant improvements and leasing to the building. The city retains ownership of Anvil Centre, the mid-sized conference facility to which the building is attached.

The News Leader reported the CRS Group of Companies is also involved in the transaction, although no mention was made of the company on the City of New Westminster website.

CRS Group developer Suki Sekhon told the paper they don’t expect to have any tenants for the building before 2015.

A good deal for the city

The city says it will save $9.5 million that had previously been budgeted for completion of the office tower.

A development assistance compensation agreement between the city, the Province of B.C., the Lottery Corporation of B.C. and Starlight Casinos funded the multi-use civic facility. The city financed the construction costs of the office tower.

The city said the project would add up to 250 full-time jobs, create a transit hub on the Expo Line SkyTrain route and add $50 million over 50 years in property taxes to municipal coffers.

Wright told The Royal City Record newspaper that the city was pleased with the deal. “It was a tough, hard slog. The price? The price is right.”