The vacancy rate for rental accommodation in the City of Vancouver dropped to just 0.5 per cent last year, and developers essentially have their hands tied trying to satisfy a growing demand for apartments due to “bureaucratic impediments” put up by the planning department. 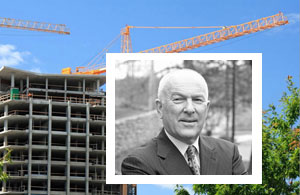 That’s the opinion of David Goodman, a prominent Vancouver realtor who has specialized in multi-family real estate for more than 40 years and publishes his research and views in The Goodman Report.

“We’re prepared to make some of these comments because the development community would rather not,” Goodman told RENX. “They can’t win if they go up against the mayor or the planning department.”

Goodman’s latest report states that those trying to create rental accommodation in the city “face dizzying levels of red tape, disincentives, financial extractions, sustainability requirements and other social engineering demands” and that building permits can take two to three years to obtain. City policies also prohibit developers from tearing down aging, inefficient and low-density apartments in existing multi-family zones and replacing them with a combination of higher-density rentals and market housing.

“There is an interest and a desire from the development community here to supplement their condo activity with rentals,” explained Goodman. “There are lots of renters and investors, but for every 10 that would like to build, maybe two or three get out of the ground.”

Goodman said there are more accommodating policies and a “more progressive attitude toward building rentals in Ontario” than in Vancouver, where protecting 60-year-old rental stock instead of enabling its rejuvenation is “penalizing apartment owners and forcing them to maintain these old buildings and not allowing owners to achieve the highest and best use for what the property is zoned for.”

Geographical constraints in the region place zoned and developable land at a premium for all types of uses, but Vancouver’s scenic location is a major draw and people want to live there. Low mortgage rates and a scarcity of product have been major factors in seeing prices in the multi-family sector increase by 140 per cent over the past 10 years.

Thousands of immigrants arrive in the city each year, and the latest Canada Mortgage and Housing Corporation rental apartment survey estimated that foreign buyers account for 2.3 per cent of Vancouver condominium sales. That figure rises to nearly six per cent downtown.

Majority of foreign buyers from Asia

Most foreign buyers come from Asia and many have roots in Vancouver. Goodman expects purchases by foreigners to continue at around the same pace as last year and he said these people are in for the long term.

“They’re not as sensitive to yields as some of the locals. They want to park their money in a safe haven.”

Rental building sales in Greater Vancouver were the highest since 2007, as the number of properties that changed hands rose 29 per cent from the previous year to 121 in 2014. About a quarter of them, comprising approximately 700 rental suites, have been or are slated to be demolished in districts that are less restrictive than the City of Vancouver.

Many of those are in Burnaby’s Metrotown area and are two- to three-storey, wood-frame buildings that have been around for more than 50 years and seen better days. Most of those demolished buildings are expected to be replaced by high-rise condos, and Goodman estimates the majority of their suites will enter the rental pool.

The dollar volume of these rental building sales rose to a record $774 million, up 32 per cent from 2013. The price per suite increased by three per cent over the previous year to $237,000.

Cap rates have fallen over the past decade from the five to six per cent range to the three to four per cent range, and Goodman believes they could drop a bit more, but that’s dependent on macro-economic forces taking place outside of Vancouver that he can’t predict.

As long as economic conditions don’t change dramatically, he said rental apartment prices and the number of sales should remain stable and the market shouldn’t be much different than last year.

“The properties that are coming to market are fully priced. Although there’s a reasonable abundance of sellers, they’re looking for significant premiums over the past couple of years and I think buyers have to get their head around lower cap rates.”