The old joke used to be that living in Vancouver meant you never had to say you’re Surrey. Well, it looks like the joke is now on Vancouver.

The new luxury hotel will feature 144 rooms, a lobby-based café, fine dining, fitness and pool facilities, and convention space. The hotel’s name is almost as big as the project itself; it will be known as the Civic Hotel at 3 Civic Plaza, Autograph Collection. 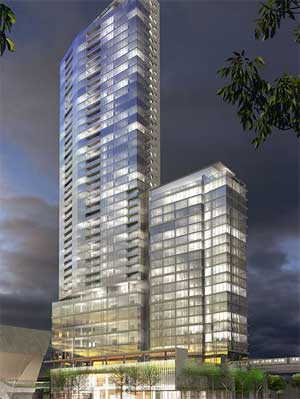 The new building will be the first new high-rise hotel for the city in more than two decades and will be the tallest tower south of the Fraser River.

Combined with its premium residences and professional offices, 3 Civic Plaza and its Civic Hotel will be the largest private project to take shape in the emerging Surrey City Centre.

“Together with the City Centre Library, the new City Hall and 3 Civic Plaza, this hotel will be a defining feature of our downtown,” Surrey Mayor Dianne Watts said in a statement.

The local firm of Cotter Architects and Portland-based ZGF Architects will design the Civic Hotel. The design is meant to reflect an international outlook and the city’s South Asian cultural influences.

The 3 Civic Plaza developer is Century Group, a real estate development and property management company that is also currently developing Citypoint in Surrey. That project consists of 21- and 25-storey towers which will contain condominiums and commercial space.

Civic Plaza more than the hotel

The tower joins a number of other buildings recently completed or in the midst of development in the city core.

A new Bing Thom-designed library totals 77,000 sq. ft. across four floors and is LEED-certified with a green roof to capture rainwater. Nearby Simon Fraser University Surrey is moving ahead with plans for a $355-million expansion.

Planning is also underway for a new performing arts centre with a 1,600-seat main stage and a 250-seat studio theatre.

And this fall, Surrey will open its new six-storey, $100-million City Hall. The new city hall will feature the country’s largest geothermal exchange system and a partial green roof.

Other projects in Surrey’s core include the RCMP E-Division, the new head office of Coast Capital Savings and the Jim Pattison Outpatient Care and Surgery Centre.