Colliers International’s Ottawa Office Market Report shows office vacancy levels are inching upwards, in part due to an exodus by the federal government. However, one interpretation marks this as a sign of promise, not doom. 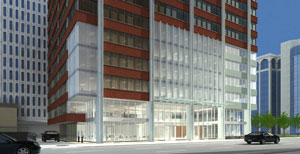 The April 15 report indicates the average vacancy rate has reached 9.7 per cent, up 1.1 per cent over the same period last year. That is putting downward pressure on lease rates which now average $17.19 per square foot, down from $18.11 at the start of 2013. The forecast further calls for a double-digit office vacancy rate over the next 24 months.

A city of opportunity

Kelvin Holmes, managing director with Colliers in Ottawa, says these numbers are not a cause for concern, however. “The City of Ottawa is in a period of transition. The downtown in particular has relied heavily on the presence of the federal government with estimates they occupied between 65 and 80 per cent of the core at times.”

He says the government, now in the midst of its Workplace 2.0 real estate strategy, is working to reduce its footprint and move departments into the suburbs where employees are closer to home and have access to better parking and light rail transit (LRT).

Holmes says the high vacancy rates reflect an exciting time to be involved in real estate as the city transitions and, he predicts, will be stronger in the end as a result. “We’ve got the new convention centre bringing in new hotel interests, condo development in the core which will drive up the entertainment factor, the Lansdowne Redevelopment project, the LRT, football . . . what isn’t to be excited about?”

The federal government’s move is simply a case of taking out the old and making room for the new, Holmes says.

He says the private sector is targeting the same kinds of plans reflected in Workplace 2.0 and re-examining space as a tool for recruiting and maintaining staff, and as an opportunity to meet new strategies for collaboration. Colliers, for instance, has moved from a dense office environment with individual offices to an open plan. Companies like Deloitte are implementing similar strategies.

In 2011, local e-commerce platform provider Shopify moved into the Market Organics building at 126 York St. and subsequently expanded to become one of the largest single tenants in the Byward Market, pointing to another trend – the growth of high tech in the core.

“Shopify purposefully made a statement ‘anywhere but Kanata’ when it expanded, highlighting the interests of the staff it wanted to attract and the lifestyle its location intended to provide,” says Holmes.

In December, Shopify confirmed its commitment to a downtown Ottawa location when it leased 350,000 sq. ft. at 150 Elgin St., owned by Morguard and currently under construction.

The idea that people can live, work and play in Ottawa’s core has potential, but is a far cry from fully becoming reality as the entertainment sector has yet to catch up. However, as the condo market evolves and companies make the transition, it will indeed come to fruition, Holmes says.  Another key initiative will be for the city and real estate land owners to be more creative and focused on development.

“Ottawa has become very institutional,” Holmes says. “Fortunately, there are major players with deep pockets owning the land so the potential for renovation and refurbishment is there.”

Holmes cites the property at 123 Slater owned by Metcalfe Realty (shown in image) as an example of what can be done. A well-maintained, but older style building, Metcalfe took the news the feds would be vacating as an opportunity for a modernization and refurbishment. The space is now being marketed to the private sector with a new façade and building automation system intended to ensure year-round tenant comfort.

As part of its tribute to “location, location” the building’s website says “the property is situated on major rapid transit routes, providing easy access to all areas of the city and beyond. Prime destinations . . . are all within easy walking distance. The nearby scenic pathways along the Rideau Canal and Sir John A. MacDonald Parkway provide easy access for Ottawa’s many avid cyclists.”

Ottawa-based Windmill Development Group’s proposed development on the Chaudière Islands, a site in the shadow of the Parliament Buildings that spans both sides of the Ontario-Quebec border, is another indication the nation’s capital is undergoing a period of urban change.

The opportunity to make some of these older properties more sustainable is also attractive to employees, especially to the younger generation.

In the third quarter of 2013, James McNeil with JJMcNeil Commercial Inc., told  Property Biz Canada: “The coming glut of vacant office space in Ottawa could be an opportunity to green up the city’s office buildings, particularly in the downtown core.”

Holmes says a few key factors are changing the way people view the core. “Television shows like Sex and the City got people thinking the downtown core could be a hub, a centre for everything that happens outside working hours.”

He says that image, combined with young people who are interested in new experiences, supported by the LRT making the core more accessible from the suburbs, will fuel the progress already underway.

Given all of that, Holmes says the low lease rates provide opportunities for established and newer companies. “More established companies have the chance to lock in longer leases at rock-bottom rates. Newer companies can take advantage of short-term rates while they find their footing and figure out logistics of the space they need.”

Organic growth not an Ottawa reality

The biggest challenge in filling vacancies, according to Holmes, is that Ottawa has traditionally struggled with organic growth, especially since the downfall of Nortel. “Ottawa is not a manufacturing town, not a port. We need to figure out what we have to offer and use that as leverage to attract new companies.”

Likening Ottawa to the resource-base of Canada’s West, Holmes says our resources were once considered high-tech and government. With those declining, the city needs to do a better job of identifying and marketing its strengths.

Further, he says, a resolution is needed in the current discussions between BOMA (Building Owners and Managers Association) and the city around the increase in development charges that “add another layer of uncertainty that may hamper the development and re-development of properties around the city, decreasing the potential to attract new business and investment inflow.”

From whichever side you view the numbers, it seems the opportunity is there to transform Ottawa’s downtown core. The only questions that remain are the who and when.

Colliers International is a global leader in commercial real estate services, with more than 15,700 professionals operating out of more than 485 offices in 63 countries.