In real estate, you should hope for the best, but plan for the worst. 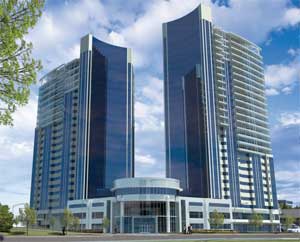 So says Michel Dallaire, president and CEO of Cominar REIT (CUF.UN-T), now the third-largest diversified REIT in Canada and the largest commercial property owner in Quebec, with more than $8.2 billion in assets. Cominar has 563 office, retail, industrial and mixed-use properties in Quebec and Ontario and Atlantic and Western Canada, totaling 45.4 million square feet. Most of the properties, 444, are in Quebec.

Dallaire, speaking Monday at the Canadian Club of Montreal, said one of the ways to plan for the worst is to ensure no single tenant represents more than two per cent of revenues.

As a result, Dallaire said the upcoming departure of Target from Canada will not seriously affect the REIT. Although there are seven Target stores in Cominar-owned malls, Dallaire says the retailer’s presence represents only 0.6% of Cominar revenues.

He says the $100 million Cominar invested to modernize three of its Montreal-area malls – Alexis Nihon Plaza, Centre Laval and Place Longueuil – was worthwhile despite Target’s impending departure. Cominar did not pay for renovations within the Target stores.

Overall, Cominar has 6,000 clients – it’s a company tenet that there are no tenants, only clients, Dallaire said. He says the company aims to use as few suppliers as possible and has its own staff of tradespeople to take care of problems that crop up in its buildings. “We want employees to say ‘I’ll take care of it.’ ”

Based in Vanier, near Quebec City, Cominar was founded in 1965 by Jules Dallaire and is hailed as a visionary by Michel Dallaire (his son). Aside from amassing real estate, the elder Dallaire was involved in retail with a variety of furniture and hardware stores and restaurants. (The image above is the Jules-Dallaire Complexe in Quebec City where phase 2 is currently under construction.)

The company did not become a REIT until 1998 and Dallaire notes the early days were rough. Banks were reluctant to lend to Cominar the year before it went public, but by 1998 “two banks believed in us.”  That belief has paid off: Revenues have increased from $26 million in 1998 to an expected $925 million for the 2014 fiscal year.

* Its 2007 acquisition of Alexis Nihon REIT gave the company a strong Montreal presence;
* Its 2012 purchase of Canmarc and its 9.4 million sq. ft. of real estate assets worth $1.8 billion helped Cominar fulfill a plan to go outside Quebec toward the West;
* And last year, Cominar increased its retail presence by buying 15 buildings (primarily shopping centres) from Ivanhoe Cambridge, the real estate arm of the Caisse de dépôt et placements du Québec, for $1.4 billion.

The shopping centres obtained from Ivanhoe Cambridge “were important for us but too small for them,” said Dallaire, making the transaction a win-win for both parties. He remains bullish about bricks and mortar retail, despite the growing popularity of e-commerce. “Shopping centres won’t disappear tomorrow.”

Cominar is aiming to be different from its competitors because “if we are like the others, we won’t be better than them.” Success requires the vision to see what others don’t, audacity and caution, he says.

Dallaire, who notes he has gone through several recessions, said Cominar should be able to weather them due to its geographical diversity in Canada and asset mix of 38% commercial, 44% office and 18% industrial and multi-use.

Another key to weathering recessions is to manage debt with prudence by not becoming overly indebted, he added.