There was a time when Concert Real Estate Corp. could operate under the industry radar given its West Coast base of operations and traditional focus on building, retaining and operating multi-residential properties. 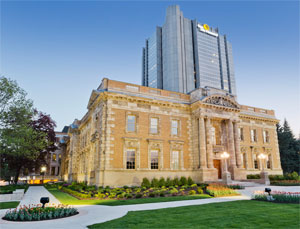 Any anonymity Concert may have clung to has all but disappeared following two significant deals in recent weeks: the purchase of a trophy office asset and a joint venture for a mega development in the red-hot Vancouver market.

“We have been busy lately,” said David Podmore, Concert’s chairman and chief executive. “We are really positioning the company for some pretty significant growth. Each of these fits in with our plans very nicely.”

Huge and historical, the acquisition immediately became the largest office property in Concert’s portfolio. The property consists of an 18-storey, single-tenant office complex totalling 745,247 square feet and associated parking comprised of a five-storey parking structure and a surface parking lot for a combined total site area of 15.9 acres.

This unique office complex consists of multiple connected buildings, constructed in several different time periods, ranging from 1912 to 1986, and has been institutionally managed by Sun Life, which is taking on a 20 year lease as part of the deal with the option to renew for a further 30 years. A purchase price is expected to be revealed when the deal closes.

Concert has quietly created an impressive commercial property portfolio, approaching 12 million square feet after the Sun Life deal but it’s clear the K-W asset is the jewel of its holdings. “It is in terms of scale certainly a very significant transaction, at least for us,” said Podmore.

“We looked at it, an excellent covenant, an excellent building, it has been extremely well built and maintained over the years, and we are very bullish on the Waterloo region. We think it has a lot of potential given that it is a center for medical research, medical education, obviously a high-tech center and service industries such as the insurance sector.

“And with a new light rail transit line going in this was very appealing.”

The Sun Life property also has room for development given its large surface parking component, but Concert views the holding as “an income property opportunity.”

Those assets are mainly industrial and suburban office, although the company does own four downtown office towers in Vancouver. It has generally stayed away from retail properties.

A corridor runs through it

The 20.8-acre Langara Gardens site in the fast-developing “Cambie Corridor” hosts four 18-storey residential rental high-rises with 335 suites and retail at grade, while the remainder of the site comprises garden apartments and townhomes totalling 270 suites.

Podmore expects the Langara Gardens joint venture offers plenty of redevelopment opportunities. “I would hope so; the entire corridor is being developed or re-thought in terms of development and Langara is situated on a future rapid transit site at 57th and Cambie. So, I think it is a very strategic location.”

Details of the joint venture are expected to be released when the deal closes early in 2015.

Concert expects to grow at a steady clip given a healthy development pipeline. Those development projects are headlined by The Kip District in Toronto close to Etobicoke’s Kipling subway station, which marks the end of the TTC Bloor subway line.

Touted as Concert’s largest multi-phased residential development in Toronto, it is also the company’s first residential condominium developments in the city’s west end. Situated on a former Canadian Tire store site, the community will be made up of 1,300 condominium homes within five buildings on a six-acre plot.

Concert is in the pre-sale process for the Southeast False Creek community (Quebec Street, 1st Avenue, Ontario Street and the seawall), which it bills as “one of the last undeveloped waterfront sites” in Vancouver. “It is a significant development with the potential for five towers, one of which would be a dedicated rental building that will be turned over to the ownership of the city of Vancouver and four residential towers for condominium development.”

Also in North Vancouver, Concert is working on its Harbourside development on the waterfront which would see lands originally slated for commercial development revamped into a mixed use project. Concert has secured rezoning for that project and has started the development process.

A builder, not so much a buyer or seller

Established in 1989 with a mandate to provide economically priced rental housing in B.C. in partnership with the City of Vancouver, the Province of B.C., union and management pension funds and private investors, Concert soon started developing multi-family, condominium properties.

Podmore summed up Concert’s multi-res strategy succinctly. “We don’t like to sell them. Our preference is to build them for our own purposes, purpose-built rental, and to hold them for the long term. So you rarely see Concert as a seller of multi-res.”

The company has been busy over its 25-year history, developing more than $2.8 billion worth of real estate comprised of more than 10,300 rental and condominium homes, and built or acquired more than 11 million square feet of income-producing property (prior to the Sun Life deal).

Concert has established a major presence in Toronto. “We have been in Toronto a lot longer than I think a lot of people realize,” said the CEO. Notable properties include the Village Gate West three-rental-tower development in Toronto’s Etobicoke and the Tapestry at Village Gate West seniors’ community, also located in Etobicoke.

As well, Concert owns the Jazz rental building at Church and Shuter and just completed, 29-storey, 463-unit Motion residential tower at Bay and Dundas Streets. It also has under construction 88 Scott a 58-storey condo project at the corner of Wellington and Scott Streets in downtown Toronto which includes a level of retail and five storeys of office.