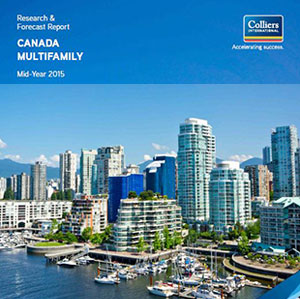 The biannual report examined multi-family housing in Victoria, Vancouver, Calgary, Edmonton, Winnipeg, Toronto, Ottawa and Montreal. Some of these markets have become oversaturated with condo developments, and purpose-built apartment rentals are presenting developers with opportunities for longer-term cash flow and lower marketing costs.

“Not all multi-family owners have the appetite to acquire land, pre-sell units, build, deliver and repeat the process,” said Colliers senior director Matthew Bruchkowsky. “Additionally, in the current environment, there is a lack of newer rental product.

“This, combined with low vacancy rates, makes it an ideal time to develop purpose-built rentals. Furthermore, it’s generally less expensive to build a rental building given that a developer does not have to incur sales commissions and the finish is generally more uniform across the units, saving both time and money.”

If a developer chooses to exit a purpose-built apartment investment, it involves just a single transaction rather than multiple condo unit sales with multiple investors.

This lowers the overall risk of the project, and many apartment developers have been successful in finding a buyer prior to starting construction, with the end purchaser taking on the renting risk in some cases.

The total value of multi-family asset transactions in the eight cities included in the report increased by 21.7 per cent from mid-year 2014 to mid-year 2015, while the number of sales rose by 14.6 per cent.

“I believe it has a lot to do with the desire by some of the larger multi-family owners to acquire assets,” said Bruchkowsky.

“Pricing is sharp, and some offers to longstanding property owners are too good to refuse. Many of these long-term owners don’t have the capital or expertise to drive rents and optimize operating costs.”

Rental rates rose by 2.8 per cent year over year across Canada, with the biggest increases happening in Edmonton (6.27 per cent) and Winnipeg (5.65 per cent). Toronto and Vancouver had the highest average rental rates for all unit types according to CMHC 2014 Rental Market Report, at $1,188 and $1,177 per month respectively.

Montreal continued to have the lowest average rental rates at $717, 0.49 per cent lower than a year earlier.

“Multi-family presents some of the most stable cash flow available in the marketplace,” said Bruchkowsky. “The majority of the product available is older in nature, but is in ‘A’ locations near transit and numerous amenities.

“Given affordability continues to be an issue for numerous Canadians, multi-family assets continue to be attractive to young professionals, students, families and those that have immigrated to Canada.”

Vacancy rates were relatively stable, increasing from 2.36 per cent to 2.51 per cent, with the most significant changes occurring in Victoria (with a 1.5 per cent decrease), Calgary and Edmonton (with respective 1.8 and one per cent increases attributable to the drop in Alberta’s oil-driven economy).

Halifax had the highest vacancy rate at 4.2 per cent, while the lowest was found in Victoria with 1.2 per cent.

“More and more Canadians are embracing an apartment lifestyle, which will keep vacancy low even as more supply is added across the country,” said Bruchkowsky.

New purpose-built apartment units are generally smaller than older ones, though they’re often larger than new condo suites, according to Bruchkowsky.

“The various new-build developers are very focused on design and space planning, to maximize the overall layout and utility of the space, whereas some older product suffers from inefficient layouts.”

“Many owners will look to intensify existing sites where excess land is available,” said Bruchkowsky. “Further, given the aging supply, a new building, despite the lease-up costs and risk, represents a high-quality, well-capitalized asset which appeals to class-A buyers and more affluent tenants, a market segment the traditional apartment building cannot capture.”