While purpose-built rental apartments are a hot topic of discussion, condominium sales show few signs of slowing down in Toronto. 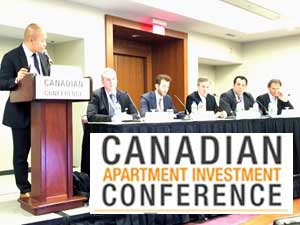 High-rise condo sales in the Greater Toronto Area through the first seven months of 2015 numbered 12,269, the fourth-highest total in the last 10 years and above the 10-year average of 11,124.

“To the rental consumer, there’s not a distinction between purpose-built apartments and rented condo units,” said Jared Menkes, vice-president of high-rise residential for Menkes Developments Ltd.

Condos are here to stay

“Condos are here to stay. Families are living in condos. It’s not just empty-nesters and singles. Condos have been the de facto source of new rental housing for the past two decades since rent controls came into effect.

“They fulfill the rental demand in this city. Menkes used to build apartment buildings and now we’re strictly condos.”

Menkes was one of the panelists who joined moderator Phong Ngo, manager of new homes research for RealNet Canada Inc., to discuss the two types of multi-family residences at the Canadian Apartment Investment Conference at the Metro Toronto Convention Centre on Sept. 10.

Tricon Capital Group Inc. director Adrian Rocca noted 1,500 purpose-built rental units are under construction in downtown Toronto in an area bordered by Eglinton Avenue to the north, Liberty Village to the west, Parliament Street to the east and the shore of Lake Ontario to the south. Another 3,500 units are proposed to be delivered within the next four to six years.

“Relative to the multi-family inventory that’s going to be delivered over that time, it’s not a needle mover,” said Rocca. “Purpose-built is a drop in the bucket and economics don’t suggest that there’s going to be a rush of new institutional capital to fund it.”

Condos can be cost-effective solution

Minto Properties executive vice-president of investments Greg Rogers believes condos are the most cost-effective solution “to deliver a huge and pressing need for urban dwelling,” at least for small units, and that it makes little sense to compare them with existing purpose-built rental properties.

“Condos don’t compete with standing rental product, most of which is old and tired. It’s often in a good location, which many landlords see as a significant opportunity. As far as condos beating up on existing apartment buildings, it’s not happening. They’re two different things.”

There was a consensus among the panelists that one of the best ways purpose-built rentals can compete with condos is through customer service and creating a sense of community, which can help drive up rents while increasing tenant satisfaction.

“If you’re a condo developer, you’re in for as long as it takes to get out,” said Rogers. “The purpose-built rental developer is in for a long time. That’s creating an opportunity to build a community.”

Condo completions continue to be high

Tridel Corporation senior vice-president Jim Ritchie added more numbers to the conversation. About 1,700 high-rise buildings with about 285,000 units have been completed in the GTA over the past 35 years, he said, and almost 23,000 old and new units are rented through the MLS in an average year. The average condo resale price is $400,000, a fraction of a single-family home, but still pricey for someone early in a career who hasn’t built up equity and sees renting as a viable option.

“As quickly as we deliver these condominium units, and the third that end up in the rental market, they get absorbed,” said Ritchie. “I don’t see anything in the near term changing.”

Smaller units on the rise again

Smaller units are on the rise again in the GTA after a period of trending down. As of July 31, new high-rise unit openings were 54 per cent one-bedroom, 38 per cent two-bedroom, four per cent three-bedroom-and-up, and three per cent studio. Lower prices may be one reason for the increased popularity of shrinking suites, but an overall lack of affordable housing has become a serious problem in Toronto.

“There are a lot of apartment buildings in various places in the city where the rents have been $1,000 a month on average in a building for the last 10 years, and in that 10 years every house that sits around that apartment building has gone from $200,000 to being worth $1 million,” explained Rogers.

“That building hasn’t kept up with the marketplace. People are buying those buildings and repositioning them and increasing the rents . . . and there goes what effectively was private sector supply of affordable housing from the marketplace.”

Was there a point where the panelists would consider cancelling the condo to go with a purpose-built rental instead, Ngo asked.

Menkes mentioned a couple of developers have walked away from sites in the last 18 months and that there’s a risk that one-off developers might not realize all of the costs and procedures involved in building a condo project and may not want to continue with it after they start.

There was general agreement among the panelists that brand name developers have built a trust factor with the public and wouldn’t risk sullying their reputations by cancelling a project after announcing it.

“We’ll put the money in and we’ll take the bet that we’ll get a different market segment of primary end users with inventory that they’re reluctant to buy today,” said Ritchie. “The solution’s not there for everybody, but usually it boils down to more cash and away you go.”