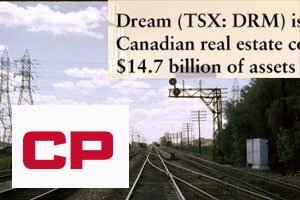 “After a couple of years of evaluating all of the real estate that we have, we decided that it was time to start utilizing some of those assets,” CP spokesperson Martin Cej told RENX.

“After a very comprehensive search for a partner, we decided to go with Dream because of their experience, expertise and vision, which all dovetailed very well with the values of this company. It was the right mix.”

More than 30 CP properties in Canada and the United States will initially be part of the joint venture. Cej said they vary in size and zoning regulations and are located in both urban and rural areas. He stressed the company is “open to any and all ideas” of how the land should be used.

Four CP properties that are part of the joint venture were mentioned in a media release:

– Schiller Park, a 75-acre site in Chicago that’s close to O’Hare International Airport;
– Obico, a 74-acre site near Kipling Avenue and Dundas Street West in Toronto’s west end industrial sub-market;
– South Edmonton Yard, a 92-acre site south of the North Saskatchewan River and downtown Edmonton;
– Lucien L’allier, a three-acre site across the street from the Bell Centre in downtown Montreal that has direct access to  the Metro and commuter rail lines.

A recent CP investor presentation mentioned a surplus real estate portfolio of more than 45 properties suitable for development, sale or lease that cover more than 4,000 acres, according to a report issued by Sam Damiani, director of institutional equity research, real estate for TD Securities Inc.  It’s estimated that CP’s surplus real estate is worth approximately $1 billion undeveloped and more than $2 billion with investment.

Dream chief executive officer Michael Cooper was pleased that his firm submitted the winning proposal from the many that were submitted to the railway company, but said it’s too early to provide details about what the joint venture will involve and that no specific plans had been developed yet.

“Our job is to work with Canadian Pacific to look at the properties and see what their best uses are. We expect that will include industrial, retail, office and residential.”