Canadian CRE to face risk and opportunity in 2015: AY

A weakening global economy, sliding oil prices, a burgeoning development pipeline and a possible interest rate hike in the United States will create both risk and opportunity in the Canadian commercial real estate sector in 2015, according to Avison Young’s 2015 Canada, U.S. and U.K. Forecast. 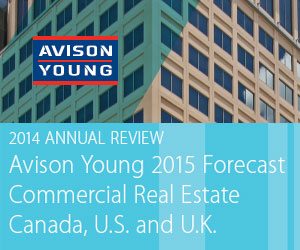 “In most of the developed world, we are currently operating in a very positive environment — with liquidity strong and transactional volumes at high levels, property and employment fundamentals improving, and alternative investment choices offering lower yields,” Avison Young chairman and chief executive officer Mark E. Rose said in the report.

“These background conditions suggest that now is the optimal time to take a pause and assess where you might be able to balance risk, take profits, and redeploy resources to exploit future market opportunities.”

More than 22 million square feet of office space is under construction across Canada, representing 4.3 per cent of existing stock, and 55 per cent of it is pre-leased. Toronto and Calgary account for 55 per cent of that space total.

The report states that the industrial vacancy rate dipped by 20 basis points to 4.2 per cent last year and, while leasing is expected to remain steady, the vacancy rate is projected to rise to 4.6 per cent this year. Almost 17 million square feet was under construction at the end of 2014, equating to less than one per cent of existing inventory, and 30 per cent of it was pre-leased.

Toronto, Canada’s largest and North America’s third-largest industrial market, can lay claim to 34 per cent of that space with 5.8 million square feet.

The report (written before Target announced it was pulling out of Canada) notes urban intensification and retailers’ adaptation to e-commerce continue to alter the retail landscape, while a failure to adapt has led to closings and bankruptcy protection as retailers cull underperforming stores.

“Buzzwords such as omni-channel, bricks-and-clicks, endless aisle, showrooming, webrooming and shoppertainment, to name a few, are expanding the retail lexicon as the marketplace continues to evolve,” said Argeropoulos. “Looking ahead in the retail sector, marketing budgets are expected to increase as stakeholders invest in physical and digital assets, as well as new concepts, and measure consumer habits, fuelling the ‘Big Data’ phenomenon.”

Dispositions continue to drive healthy investment levels in most Canadian markets, the report says, and an estimated $22 billion of commercial real estate sold through the first 11 months of 2014. It states REITs have lost some steam, but pension funds and private investors have filled the void and kept capitalization rates low for core assets.

Among the more interesting highlights for the Canadian markets were:

• There’s an increasing number of new, purpose-built, multi-residential rental projects under construction in Calgary’s inner city.
• Edmonton’s office market had its most important year in 2014 since the last downtown building boom nearly three-and-a-half decades ago.
• Significant vacancies in Kitchener’s downtown core and the former BlackBerry portfolio in Waterloo continue to drive rental rates down, providing ideal conditions for tenants.
• A number of manufacturing and distribution properties in southwestern Ontario, which were on the market for a year or more, were absorbed in 2014 and had average rents ranging between $5.75 and $6.25 per square foot for new buildings and from $4.50 to $5.50 per square foot for second-generation space.
• Developers’ confidence in Halifax spurred construction of commercial and multi-residential projects, which has led to an overabundance of available space.
• With many business owners in Lethbridge swapping lease payments for mortgage payments, space in prime properties and older buildings opened up but was backfilled quickly, resulting in tough competition for developers marketing new projects.
• Vacancy rates in Montreal rose to 11.5 per cent from 9.7 per cent in 2014, largely due to the addition of nearly one million square feet of new inventory, the conversion of former industrial buildings to loft-style office space and the rationalization of occupied premises by tenants at lease renewal time.

• Vacancy rates in the greater Ottawa market continue to rise and are expected to surpass nine per cent for the first time since the fallout in the technology market early in the last decade.
• The Quebec City Region industrial market consists mainly of owner/users and there are very few tenancies and assets available for sale, so rental rates and selling prices are approaching the cost of new construction.
• The investment market in Regina was relatively slow in 2014 due to a shortage of supply, as activity focused on the sale of smaller, privately held properties.
• The Greater Toronto Area commercial real estate market will begin to face the impact of new development and backfill vacancy in 2015, especially on the office and industrial fronts.
• Developers in Mississauga are moving towards renovating existing buildings, utilizing infill sites and gradually shifting to accommodate smaller-sized tenants requiring less than 120,000 square feet of space in their big box properties.
• Government spending tied to port-related transportation infrastructure and bullish sentiment based on strengthening cargo flows through Port Metro Vancouver pushed speculative construction to levels unseen in recent times in Vancouver in 2014.
• A wide range of new developments, including high-rises and the expansion of the RBC Convention Centre, are redefining Winnipeg’s core.

Avison Young was founded in 1978. The firm is owned and operated by its principals and has 60 offices and more than 1,600 real estate professionals across Canada, the United States and Europe. It provides value-added, client-centric investment sales, leasing, advisory, management, financing and mortgage placement services to owners and occupiers of office, retail, industrial and multi-family properties.