Crestpoint Real Estate Investments Ltd.’s June acquisition of a 50 per cent stake in H&R REIT’s Telus Building in Vancouver has led to a much bigger deal: a $731-million agreement to a 50% interest in 101 industrial properties held by H&R. 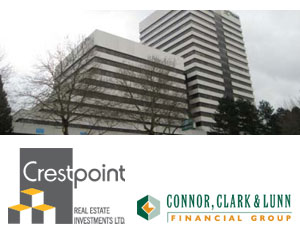 The deal effectively doubles the value of Crestpoint’s real estate portfolio under management to approximately $1.5 billion.

Crestpoint president Kevin Leon said negotiations leading to the deal began around the time the company was in discussions with H&R about the Telus Building.

“From there, we started talking about the industrial, so basically we have been working this since the spring.” (Leon would not reveal the ownership split between Crestpoint and PSP).

For Crestpoint, which is part of the Connor, Clark & Lunn Financial Group, the deal boasts a number of positive aspects. It allows investors of its Connor, Clark & Lunn open-ended fund (the Crestpoint Core Plus Real Estate Fund) a chance to invest in a large pool of industrial assets. It also brings PSP Investments, an established client, access to the investment.

As well, the agreement with H&R gives Crestpoint an ownership stake in a large portfolio of hard to acquire assets, said Leon. “Industrial is very hard to get scale in. Industrial is probably the toughest asset in our business that pension funds and institutional capital have a tough time getting scale in. So this allows us to kind of get scale in a portfolio with a good price.”

Plus, the deal cements a previously established working relationship between Crestpoint and H&R. Both companies share a similar office, industrial and retail focus “but I think we feel that a combination of us and H&R working together, we can really cover off the entire Canadian market for sure,” Leon said. “Between us and PSP getting involved we are going to see every industrial deal, or most every industrial deal, in the country.”

Prior to the deal, Crestpoint’s industrial portfolio was valued at about $150 million, Leon said.

The portfolio to be acquired by the Crestpoint joint venture consists of 101 properties (85 in Canada and 16 in the U.S.), comprising approximately 19.5 million square feet of industrial space and 1,465 acres of land. The U.S. properties are generally bigger, with the 16 properties comprising 6.4 million sq. ft. compared to 13.1 million sq. ft. for the 85 Canadian properties.

The deal is expected to close in two tranches, in December and in February.

The portfolio holds a good geographic mix of East and West in Canada comprising distribution and logistics centres as well as manufacturing across eight provinces. In both the U.S. and Canada, occupancy is either at or close to 100 per cent.

Leon expects a strong economic tailwind given the rebounding U.S. economy, but the acquisition is not dependent on an economic recovery.

“We bought strong existing income. It is not like we bought a bunch of vacancy or we bought at a very low rent and we are counting on higher rent to get us to a market return. We already have a very strong initial return.”

As part of the agreement, H&R REIT will continue to manage the portfolio as property manager and will earn standard industry fees.

H&R expects the proceeds from the sale to total approximately $390 million, of which $325 million will be used to repay bank and other indebtedness. After the transaction, H&R expects its ratio of debt to total assets to decrease from 47.8% as reported on Sept. 30, to 45.7%.

The deal encompasses virtually all of H&R REIT’s industrial properties except for one small vacant Las Vegas property and eight industrial sites in Canada including 2.7 milllion sq. ft. leased to Canadian Tire Corp. and Loblaw Cos. Ltd.