Crisis and opportunity for big cities with drive to urban intensification

Toronto city councillor Adam Vaughan has witnessed the urban intensification trend first-hand. The downtown neighbourhood he represents has morphed from a business and entertainment district to one where condos seem to sprout like summer weeds. 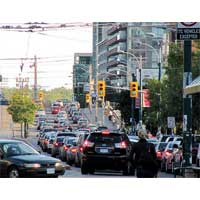 “When I came to this neighbourhood in 2001, according to the census there were 231 people living in residential units in this neighbourhood. By 2020, it is expected to be 20,000,” he said at the Toronto Real Estate Forum on Wednesday.

Vaughan said the spurt of development carries with it one of the worst aspects of the suburbs, namely “monolithic development that doesn’t take into account all the drivers that make a healthy downtown neighbourhood.”

Today, rush-hour traffic out of the city core is nearly as bad as the commuter influx into the city, a reality that illustrates “we are replicating the problem” of suburbia, he said.

Rather than cookie-cutter suburban homes, the new condos tend toward single-bedroom units that house people working nearby. The issue, he said, is when those young people want to start families and have difficulty finding accommodations and services in the core.

Immigration to cities such as Toronto and Vancouver is speeding up the pace of change “and we as cities and those new immigrants are not being absorbed well,” said Vaughan. The influx has helped create a housing crisis in big cities, which he said can only be addressed by more national and provincial government involvement.

He added the lack of a federal long-form census is robbing planners and developers of the data they need to make well-informed decisions.

Canada is expected to add about 16 million people over the next 50 years, a major challenge for the country’s major cities, said Paul Bedford, an urban and regional planning professor with the University of Toronto and Ryerson University.

He said that municipalities need to create urban plans that are flexible and “big picture” in the official plan with details in the zoning. As well, he sees “huge room” for out-of-the-box planning. The former chief planner for the City of Toronto recalled the time when he abolished all land use rules and density targets for the lower downtown with urban design criteria.

“From that one policy change that was adopted by the council of the day in 1996, huge private-sector investment and revitalization has taken place in both King-Spadina and King-Parliament.”

Blake Hutcheson, president and CEO of Oxford Properties Group Inc., heaped praise on the City of Toronto’s planning department, which he said is often overshadowed by all the political noise. The development giant could invest anywhere, but it has $1.6 billion of development in the city “and we want more . . . Toronto is as easy a place to get stuff done as anyplace in the world,” he said.

Hutcheson said growth, whether slow or fast, presents a positive future for Canada when compared with countries like Japan where the population is expected to actually shrink in the decades ahead.

The intensification of the downtown core “is a virtuous circle. People come here, they pay tax, the tax goes to City Hall and they can invest in infrastructure and when infrastructure is built, you get so many other things; whether it is retail or entertainment, that is where people want to be.”

It also fits well with Oxford’s development and investment philosophy, he said.

Dori Segal, president and CEO of First Capital Realty Inc., noted that his company made a decision a decade ago to focus its investments on urban markets because, like Oxford, they saw the shift from the burbs into the core.

“As retail owners and developers, we obviously had to learn a lot in terms of what is going on in the city in terms of residential,” Segal said, “and very soon we came to the conclusion that it would be very hard to develop in a city such as Toronto – or anywhere else for that matter – the old shopping centre simply because land was too expensive and there is room for a lot higher quality of development.”

First Capital decided to buy everything between the boundaries of the 401, 427 and Don Valley highways and along subway lines of what it termed “close suburbia.”

That strategy made the developer an opinionated and interested player on the planning front. All those planning issues that vex politicians and bureaucrats “matter to us a lot,” said Segal.

He identified three issues that are often overlooked in the current downtown residential development: the size of condo units, the quality of the buildings and the surrounding neighbourhood. “Those are issues that concern us as the biggest investor in the neighbourhood for the next 50 years.”

He worries that a large number of condos are currently being built for investors rather than those who actually want to live there, resulting in ever smaller units. Building quality should be demanded of condo developers instead of simply focusing on height, he said.

“As much as there are challenges, there are actually some solutions,” he concluded.