There are plenty of real estate investment and management companies operating across the country. Most have their own unique take on the business, owing to their respective strengths and weaknesses. 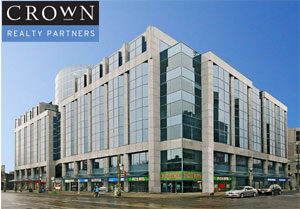 For Toronto-based Crown Realty Partners, which has more than $1 billion worth of assets under management in the GTA, it’s all about vision and control.

“Probably the largest thing that sets us apart is that we are in full control of any asset management plan,” explained Les Miller, Crown’s managing partner of real estate management. “We don’t rely on third parties, everything is in-house from construction to leasing to property management.”

That approach allows the company to work “faster and better,” he added.

Crown, which is backed by pension funds and other large investors, is a picky purchaser, Miller explained.

“There are two things. We stabilize them from an income point of view.”

That might include instituting a lease up program, filling a stubborn vacancy or preparing for a future wave of lease expirations.

“We try to take the risk away from the income and stabilize it. The second thing we try and do is most of these assets have not really had any “vision” to them, it is like fix what is broken and repair,” he said.

Many of the buildings Crown has purchased are Eighties-era properties with amenities that date back to that less tenant-friendly period.

Often when the company purchases a property it will add features such as bicycle lockers, showers, electric car charging stations and a free Wi-Fi in common areas.

It’s a downtown approach but elements of it can be adopted in the company’s most suburban holdings, Miller argued. “You certainly don’t have the bike storage demand, but there is probably more car parking with electric car charging in the suburban locations.”

Crown looks to add food and transportation services to properties if it finds them to be inadequate. For example, it operates a shuttle service from a few of its Toronto properties (one links its building at 155 Gordon Baker Rd. to Fairview Mall) and another links Union Station to its 901 King St. W. building (shown in the image above).

“I think a lot of our competitors, they sit down, they go through the financial analysis and look at really pushing the rents,” he explained. “There is nothing wrong with that as their rent strategy. We look at it: how do we make this place a good workplace for the employers out there? What are people out there looking for to offer to their employees?”

It’s not a unique viewpoint, as most properties owners are trying to up their appeal to attract new tenants and keep the ones they already have.

Miller contends Crown wins out when it comes to actually carrying through on its upgrades. “I think everybody has great ideas,” he said, “but I don’t think any of them execute as well as we do.”

Crown currently owns the vast majority of the 36 buildings (5.2 million square feet of office space) it operates in the GTA.

The company can carry out property management on a third-party basis, but it is not its main business. “We haven’t typically gone to the market to offer our services as a third party unless there is a telling story where we believe that we can make a difference.”

Crown did add a property management contract this month: for the 371,000-square-foot Munich Re Centre at 390 Bay St by owner Munich Re.

“We thought we could add value so we bid on the contract – we bid against national firms, some very big firms, and we were selected.”

Given its location close to the city’s main courts, the building’s main tenants will be law firms and other associated businesses rather than major financial firms.

Miller would not say what is in store for Munich Re, beyond the “high-quality, cost-efficient and sustainable environment” for its tenants, as related in Crown Realty’s recent announcement of the contract win.

“We do have a vision of what we would create as services in the building. It’s a little more than just bike racks, it is a whole style of how we manage.”

Crown Realty used to operate in Winnipeg before retreating back to its GTA base. It is currently entertaining the idea of expansion once again.

“We have looked at should we take it outside of the GTA? I think there is opportunity in other markets outside of this one.”

Given the company’s preferred strategy of purchasing and breathing new life into under performing properties, a logical question would be just how big is that base of potential acquisitions? Given all the attention paid to building operations, it might appear opportunities would be few and far between.

Miller said that is not the case.

“There are lots of properties that fit that criteria. The problem that we are running into, no different than anyone else, is the pricing expectations from the vendor who just thinks there is so much capital” to buy properties.

“The only time performance really rises to the top is in a poor economic (environment). When there is so much money chasing product, and not very much product, you don’t have to run a property very well to get a good price.”