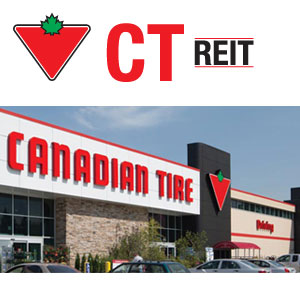 “Yes, I think that is probably accurate,” CT REIT’s president and CEO Ken Silver said of its “blue-chip” status.

Silver attributes much of that stability to the trust’s early development. “It goes back to the thought process we went through in creating the REIT.”

CT REIT’s IPO took place at the end of a great run for new real estate trust public offerings when the U.S. Federal Reserve’s pulled back on quantitative easing in 2013 – the so called “taper tantrum.” As a consequence, Canadian Tire (CTC-T) was forced to build a better REIT.

“It really helped us focus on creating a REIT that would perform well, under all sorts of conditions, whether it was economic uncertainty or rising interest rates,” Silver said.

“We were really looking at how to benefit from the change in the market . . . how do we create a REIT for the future that would work well for investors?”

Silver, a 20-year Canadian Tire vet who was president of Canadian Tire Real Estate Ltd. prior to heading up the REIT, sought a “combination of safety and security – and growth.”

The trust boasts great stability in part because it is a beneficiary of having “locked-in” growth with a great core tenant and the best lease rate in the industry averaging 15 years and yearly rental growth of about 1.5 per cent.

The REIT has been able to create some unexpected upside by adding more properties from its retail parent and through third-party acquisitions.

“Inside the portfolio, there are some intensification opportunities that we have been pursuing, in some cases expanding the Canadian Tire store, in other cases doing pad deals with restaurants or banks or dollar stores, that kind of thing,” Silver said.

“And we have also been doing third-party acquisitions and development. We have been able to initiate and execute a growth strategy that has probably exceeded people’s expectations.”

The trust’s executive strives to be “better than average” when compared to its REIT peers, he added.

“Obviously a unique competitive advantage is our relationship with Canadian Tire, which is not only the Canadian Tire banner but we have category-leading banners in other areas, Sport Chek in sporting goods and Mark’s in men’s wear.”

That allows the REIT to carry out expansions such as the purchase of land adjacent to a Canadian Tire store in Swift Current, Sask., to build new Sport Chek and Mark’s outlets. A similar addition of those two stores was made to a Canadian Tire property the REIT owns near Hamilton.

Working closely with the parent retailer’s real estate division, Silver said the REIT does not hesitate to ask Canadian Tire to buy “a few extra acres” for complimentary expansion in the future.

REIT portfolio growth through properties passed down from the parent company is a “reliable” source of growth but CT REIT is increasingly looking beyond Canadian Tire for growth.

“We have two levers we can pull to drive the REIT’s growth,” said the REIT chief. “One is the pipeline of  stores from Canadian Tire, the other is third-party acquisitions and development.”

A JV with Oxford

When it comes to growth, perhaps the biggest opportunity on the development front is the REIT’s 2014 joint venture with Oxford Properties Group to acquire a two-thirds interest in Canada Square, the Yonge and Eglinton home of Canadian Tire’s national headquarters.

The partners view the mixed-use site located on about seven acres as ripe for expansion.

“The crosstown LRT is under construction, the area is rapidly intensifying, and the property is almost completely occupied and was accretive at our acquisition . . . it is a fantastic re-development opportunity,” said Silver.

Today, Canada Square has GLA of about 844,000 square feet and the development partners expect that they can add another two million square feet of density to the property.

“So that is a really interesting long-term growth opportunity for the REIT,” said Silver.

At the other end of the spectrum, the REIT this year acquired an under performing Arnprior Shopping Centre in Eastern Ontario and will populate it with a new Canadian Tire store flanked by a Mark’s and re-lease the rest of the space.

“We have truly a national portfolio and we see opportunities in markets literally from coast to coast,” Silver said.