Even Cowtown's 10-by-15 offices are in trouble

With office space becoming a more precious commodity across Canada, businesses are cutting back on the enclosed, private office and moving toward more open, collaborative spaces. 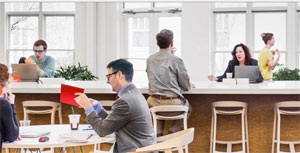 A seemingly unstoppable trend is making the big, 10-by-15-foot office an endangered species even in traditional big-office markets like Calgary.

That is the on-the-ground observation of Scott Ellis, president of Calgary-based Contemporary Office Interiors, which performs workspace design and furnishing for oil patch giants such as Shell Canada, Trans Canada Pipelines, Encana and Enbridge.

“The indisputable fact is that space is shrinking, but more importantly, it is not so much that companies are taking less space, it is that they are allocating it differently,” he said.

That can be seen in the ratio of private office space to open space which has fallen from 70-30 a few decades ago to closer to 50-50. “The individual work space is compressing and the group space is getting larger.”

The underlying drivers of the trend to more collaborative space and less private office space is attributed to more mobile employees and a team approach to project management.

Even in Calgary, the trend is proving hard to resist.

“The predominate footprint in Calgary for oil and gas has been the 10-by-15 office, but we see that footprint shrinking” said Ellis, whose firm also has offices in Edmonton and Winnipeg.

“In a lot of organizations the only people that are getting the 10-by-15 are senior executives and after that you are starting to see 10-by-12 for private offices and then the open offices.”

Ellis said he is often struck, when visiting their clients’ locations, by how few employees are generally occupying offices at any particular time. “Nobody is in the space. The answer, of course, is mobility . . . everyone is moving.”

Most employers are still struggling with the changing nature of work and how to partition private and open work areas. While it is still a guessing game for many,  Ellis said specialist firms like his can instruct clients about how to optimize their office footprints.

“We have tools now to allow us to actually give you evidence-based data for decision-making rather than just based on assumption, which most people are still doing.”

Although the underlying trends support more common work areas, inertia and tradition are powerful brakes on change. “People don’t want to give up the ‘status quo” and status. They are still very strong drivers,” he said.

The future is open

Contemporary Office Interiors is an authorized dealer of Zeeland, Mich.-based Herman Miller, which regularly conducts research into the future of open space.

“The two major trends that drive everything are that the power has really shifted from the institution to the people, so people have more power,” he said. “As well, the shift has really been from status quo and routine as a management practice to resiliency and learning.”

Those long-term, mutually supportive trends are behind the shift to more open, flexible offices he says.

“We talked to an oil and gas company about the furniture that we suggested and they said, ‘It looks a lot like IKEA.’ It was certainly not from the quality standpoint, but they are right from the aesthetic standpoint because it is light, it is modern, it is modular and can move. It is built to change when the work changes.”

Contemporary Office Interiors’ clients might want to take a tour of one of their warehouses.

“Unfortunately, for a lot of our customers, our warehouses are full of furniture that they don’t use,” Ellis said. “Every time that they reconfigure or change their furniture, they give us back furniture that stays on our shelves for 10 years.

“We are trying to move them away from that.”