As a key player in the industrial real estate sector, Dalfen America Corp. (DAC), has a front-row seat to American business trends. 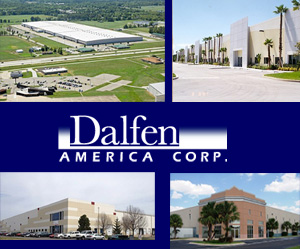 “What we are seeing is a huge explosion in the demand for e-commerce related spaces,” president and chief investment office Sean Dalfen said of the world’s most dynamic economy.

(This is Part 2 of an article first published on August 20 as  Part 1: Dalfen grows massive U.S. industrial portfolio)

One of those is infill metro markets that allow a distributor quick access to a large population centre. Increasingly, Dalfen has found tenants’ Internet sales are picking up and the expensive retail spaces are morphing into showroom space.

“It behooves them to locate in areas where they can reach their client base the same day. That way they can compete with an Amazon. People don’t only sell on Amazon, they end up competing with Amazon.

“Because if Amazon, like in Dallas and Tampa and other markets, can give you your products in two hours, well you better be certain that you are able to provide the same service or you are not going to be able to compete.”

The rapid rise of e-commerce has seen Dalfen buy properties at major U.S. airports, even in cities some would think of as unlikely candidates such as Detroit, where its 300,000-square-foot facility is fully leased by Nippon Express, UPS and Cardinal Health.

In the industrial sector, the likes of Amazon, Target and Walmart, who require up to a million square feet of space, are the exception rather than the rule, Dalfen explained.

“You have everyone from your regional companies to your big international firms who just want to be spread out amongst metro markets across the U.S. who don’t need a million feet. What they need is 100,000 feet, 50,000 feet, 20,000 feet and the clear height isn’t as important.”

Close to the markets

What is important for this larger group of industrial users is to be close to their clients’ markets. That has resulted in companies shifting from a few massive industrial locations in the U.S. to many smaller, well-dispersed sites near their key selling areas.

“What they realized is it makes a heck of a lot more sense for them to locate within these major markets and to have 20 distribution centres as opposed to three or two.”

“So we are seeing even our smaller spaces are filling up with everyone from international to regional” and even local businesses.

Dalfen is also seeing the “reshoring” phenomenon firsthand in his home state of Texas. In June, DAC purchased a six-building class-A industrial portfolio (767,952 sq. ft.) in McAllen, Texas with another nine acres of developable land.

McAllen’s biggest attractions are its proximity to the Mexican border, the Anzalduas International Bridge, a “massive manufacturing hub” just south of the border and shifting trade patterns.”

“Considering that the average wage per worker in Mexico is now cheaper than China, it makes a heck of a lot of sense for a lot of manufacturers to make their goods there.”

“Assemble one or two components in the U.S., slap a Made in America sticker on it, they are not paying any taxes from a NAFTA standpoint, and their goods come out less expensive than if they were built overseas.”

“And they don’t have to pay the shipping costs and have to deal with work stoppages at the ports.”