Ottawa’s planning committee chairman made it clear at the recent Ottawa Real Estate Forum that the city wants development along the future light rail line and is making it easy for developers.

However, Coun. Peter Hume also said the municipality is looking for higher development charges for transit to help pay for both the first phase of light rail being built for $2.1 billion and future phases, contained in the recent transportation master plan, expected to cost another $2.5 billion.

“We’ve created . . . an extremely permissive framework for you to come in and build when the markets demand it,” Hume said. “We will make sure that you can achieve your development goals under a time frame that is realistic. . . . If we need to sweep away impediments, we will do so.”

Hume said development studies show there is capacity for 40,000 new residential units and three million square feet of non-residential space in areas near six transit stations along the first phase of the city’s light rail project, due to be operational in 2018. 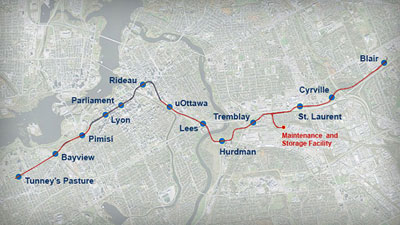 While he did not give specifics, Hume said the city would be looking into raising development charges specific to transit to help pay for this infrastructure.

Hume told the forum audience he doesn’t expect much opposition to higher development charges for transit “because I believe them to be vital to the city’s interests.”

A 12.5-kilometre east-west line featuring an underground tunnel through downtown is currently in development. And just last week, the city revealed a master transportation plan that adds 35 kilometres of light rail further west, east and south, and is to be completed within a decade.

George Dark, an architect with Urban Strategies Inc. in Toronto, told the forum such transit is “highly directive of real estate development,” noting that before Toronto’s Yonge Street subway line opened in the 1950s, there was little development in the now-prominent corner of Yonge and Eglinton Avenue.

“These are the Yonge-and-Eglintons of 50 years ago,” Dark said of the lack of development at some of the planned light rail stations in Ottawa.

That sentiment was shared by Ottawa Mayor Jim Watson.

“Transit acts as a magnet, as we all know, to development,” Watson said at the forum.

“It’s a very exciting time, I think, for the development industry and the real estate industry because we know that transit does draw people to those stations.”

Watson added the city will be making moves to facilitate development around light rail transit stations.

“It’s in our interest, from a public-policy point of view, to get more people living and working near public transit for the simple reason that we just can’t keep the single vehicle clogging our roads,” Watson said.

There were skeptics, however, such as Kelvin Holmes, managing director of Colliers International in Ottawa.

“I don’t think that light rail is going to be a catalyst for new development,” he said. “It might shift some development from other parts of the city.”

Winners and losers of the transit process

There was also some speculation about what light rail would mean for the office market, in terms of what areas of the city would benefit and what areas would be hurt.

Michael Church, managing director of Avison Young’s Ottawa operations, said the question “raises an interesting perspective. If you believe that we’re building LRT to open the city up to everybody and to open the employment nodes to everybody, that scenario would suggest that you’re going to kill the suburbs because everybody’s going to want to get downtown because it’s so easy to get to.”