Toronto-based real estate developer Diamond Corp., the driving force behind about nine million square feet of development in the GTA since 2008, can comfortably be described as one of the industry’s best-kept secrets. 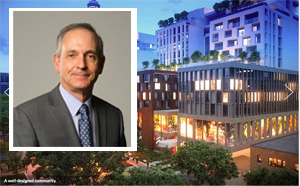 Over the past eight years, the low-profile company has linked up with some of the heavyweights in the business to put together landmark projects such as the mixed-use development in downtown Toronto dubbed The Well.

Diamond, with 14 projects either completed or under development from a duo of investment funds, has a secret sauce that has driven its stealthy success: a real knowledge of how Toronto City Hall works and how to get developments through the political, bureaucratic and community group maze.

Chalk that up to company founder, president and namesake Stephen Diamond, a former corporate lawyer and partner at McCarthy Tétrault, where he was also head of the municipal law and planning group and served on the firm’s board of directors.  (Stephen Diamond shown in image with The Well in the background.)

Three decades-plus of municipal and development law experience has been the solid foundation for Diamond’s success, both personally and at his 12-person outfit.

“One of the things we are known for at City Hall is our reputation as being city builders and being able to work with both city staff and the communities that we develop in,” said Diamond. “I think that when we embark on a project, the city and the communities do have confidence in the product that we are going to produce.”

If anything, Diamond’s hard-earned knowledge of what flies – and doesn’t – at City Hall will grow in the future. “It is a very difficult process but it is one that is going to remain and, if anything, get more complicated as the city grows and gets more sophisticated as well.”

The Well’s a good model

Diamond Corp.’s current marquee project, The Well, is a good example of what the company can do as the guiding force of a massive development.

The 7 1/2-acre project of residential, office and retail at the northwest corner of Spadina and Front Sts. represents a three-way partnership that includes RioCan REIT (REI.UN-T) and Allied Properties REIT (AP.UN-T).

Diamond Corp. has been responsible for leading the design-development and land-use approval process at the city while the two REITs will be responsible for building out the office and retail components of the project once building permits for Phase 1 are granted, Diamond explained.

For Diamond Corp., The Well represents the biggest component of the company’s second investment vehicle, the Whitecastle New Urban Fund.

Together with the first Whitecastle fund, the company has raised a total of $200 million for development in the form of 52 acres of land acquired and now in various stages of development which will total 9.1 million square feet of real estate for residential and commercial use.

The company’s developments are getting bigger and more ambitious: after raising $200 million for its first two funds, it announced this month it has raised $220 million for its third Whitecastle New Urban Fund.

Diamond Corp. financed eight projects with its first fund and six with its second. The company’s president is unsure how many developments the much larger third fund can create, but the betting is on bigger.

“We are working on a very big one now, but I really won’t know if it will close or not until the end of June,” said Diamond. “But if it does, it will make the news, I’m sure.”

He added the proposal, which would be part of fund No. 3, is “as big or bigger” than The Well and would also be in the city’s downtown core.

For those real estate vets who may be thinking the Diamond name rings a bell, Stephen’s father E.A. (Ephraim) Diamond was the first president, chairman and CEO of Cadillac Fairview.

“So I have a lot of real estate in my blood,” said Stephen Diamond.

Diamond’s father passed away in 2008, but he left his mark on the real estate business. He founded a construction company with partners Joseph Berman and Jack Kamin in the 1950s. (They named the company after Kamin’s Cadillac, so the story goes, and after some legal tussles with General Motors retained the name).

Growing alongside Cadillac in the 1960s was Fairview Corp., owned by the Bronfman family. With Cadillac “land-rich and relatively cash poor” according to The Globe and Mail, negotiations for a merger culminated in 1974. The Bronfmans owned the largest stake (35 per cent), but Diamond was effectively in control as president and CEO until retiring in 1979.

He remained on the board’s executive committee until Cadillac’s sale to JMB Realty Corp. in 1987. Cadillac Fairview was subsequently purchased by the Ontario Teachers’ Pension Plan (Teachers’ in 2000.

An Officer of the Order of Canada

The elder Diamond, an officer in the Royal Canadian Navy in WWII and an engineering grad of Queen’s University, was appointed an Officer of the Order of Canada in 1994 and inducted into the Canadian Business Hall of Fame in 1988.

For humanitarian work, he received the 1980 Human Relations Award from the Canadian Council of Christians and Jews and the 1979 State of Israel Prime Minister’s Medal for Humanitarian Services.

The use of the Whitecastle name for Diamond Corp.’s investment funds is a nod to the family’s past. Ephraim created a family holding company by that name back in 1958.

“Whitecap, which is a venture capital fund, has nothing to do with real estate, but the family is invested in the Whitecastle New Urban fund,” Stephen explained.