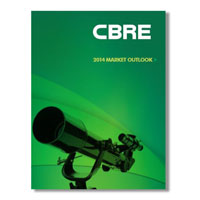 Commercial real estate has been on a steady rise since the recovery from the financial crisis resulted in an improving economy and falling interest rates. Those relatively easy days ended in mid-2013 when a rate spike jolted the industry and took a whack at REIT valuations.

The current year promises to be at least as interesting as the last one as to some degree those beneficial tides have pulled out and, in the words of Warren Buffett, it becomes clear who has been swimming naked.

“We definitely see an increasing divergence in the performance of the leasing markets across both geography and asset classes,” John O’Bryan, chairman of CBRE Ltd., said at the Real Capital forum in Toronto this week.

“The rising tide that lifted all boats has ended, especially where we see lots of supply coming down the pipe.”

So who is facing the most “exciting” 2014 in the eyes of the CBRE chairman?

Well, REITs for starters. The stock market valuation that hit REITs following the U.S. Federal Reserve’s mid-May taper has made trusts “a combination of both sellers and buyers.”

Investors are going to continue to squint hard to discern AFFO growth and a “compelling core strategy.” Those that have it will find favour with investors, according to O’Bryan’s argument.

From a leasing perspective, CBRE expects 2014 to be a good year for industrial properties. Demand for logistics facilities, a continuing U.S. recovery and a further softening Canadian dollar will give a push to industrial in most major markets. Industrial should also benefit from a very disciplined approach to adding new space to most markets’ inventory.

O’Bryan noted that institutions are poised to become “increasingly dominant players” in the development of industrial real estate over the next decade as they have been major buyers of land parcels for development.

The picture is quite different with regards to office, where “supply restraint is definitely not the label you could apply.” O’Bryan zeroed in on Toronto, which will add about 4.3 million square feet in the next three to four years.

The building boom, in the core and south of Union Station, is characterized by the stability of its backers: all of the capital is fully institutional “completely aligned with the instincts of institutional capital.”  The developers, meanwhile, already own assets in the same area and some will actually lose tenants from their existing buildings. “There are definitely no rookies in this lineup.”

If the so-called “smart money” is behind Toronto’s office boom, the obvious question is why potentially hurt the viability of their existing portfolio? Simple economics, scale and demand, said O’Bryan.

“Institutions can build brand new office buildings and add them to their portfolios at better pro forma returns than they can buy the equivalent product in the market – assuming that product is even available. In addition, the development risk . . . can be accommodated within extremely large, high-quality, diversified portfolios which generally continue to outperform.”

As well, the buildings are going up because tenants are demanding the new space.

“Most of them need to address new workplace standards, which means that they either relocate or restack and renovate. Since the hard costs are similar in either scenario and the dislocation of restacking is often daunting, moving is often the only logical answer,” said O’Bryan.

New space is also better able to handle “greatly increased physical density” demands of tenants and it appeals to geographically disperse tenants who want to consolidate into one space.

The tenant math works also adds up, he said. “If you face a mid-to-high $20s renewal rate and you take 15-to-20 per cent square footage, which is about the intensification norm, then the math does indeed work.” Add the realty tax credit some tenants will qualify for and the math is even more compelling.

That leaves the fate of the four million square feet or so that will be vacated as a result. The good news is vacancy rates are currently “relatively tight” in Toronto’s downtown and hiring intentions are turning up for the first time since the second quarter of 2012.

CBRE’s prediction: the new buildings will fill more slowly than in the last cycle, “but not drastically so.” The emptied space will provide sufficiently large blocks to compete with new builds for big tenants and will be refurbished to accommodate greater densities demanded by tenants and rents will fall in the form of free rents and tenant allowances.

He summed up the office situation in Toronto as “adjustment yes, Armageddon no.”

The CBRE chief also tackled what is in store for REIT’s and the impact of rising interest rates on cap rates and property values. The good news for trusts is that moderate increases in bond rates, stable to declining spreads and a good mix of lenders “has meant that debt is attractive and relatively plentiful.” That can be seen in part by investors’ receptiveness for large, unsecured debenture offerings.

The biggest issue for REITs may not be the timing and size of any interest rate increase, but rather the widespread view that they will be “inexorably hobbled” by rising rates.

Again, O’Bryan stressed that quality wins out whenever investor scrutiny heightens, such as when market fundamentals get tougher. All real estate is not created equally in terms of liquidity and value.

Based on some research in Canada and the U.S., CBRE concluded the interest rate-valuation question by offering the notion that on average, for every 100 basis points of long-term rate increase, the long-term cap rate will increase by 15 basis points.

O’Bryan also put the REIT sector’s market pullback from the U.S. Fed taper in perspective. Yes REITs fell 10.6% over the full year, but the group also came off 15 years producing an average compound return of 15%. “The REIT sector has extracted every advantage possible from the long decline in interest rates.”

The CBRE head concluded with the view REITs have transitioned to a U.S. model where they will be judged by their ability to outperform with regards to operations and value-add activities such as development and redevelopment. The focus will be less on falling interest rates or improving rent levels and instead on more flexible capital structures and lower payout rates.

“This transition to a more U.S. model for our REITs is already part of our investment landscape,” he said. “The  public markets have recognized those companies who have the ability to grow net income or AFFO and they have the advantage of lower yields which makes them fully able to compete for most assets most of the time.

“In other words, many of our familiar REIT names will be active again in 2014 – however as mentioned earlier, they will be sellers as well as buyers. The days of pure asset aggregation are behind us.”