Montreal should seize the opportunity to put electric heated sidewalks on Ste.-Catherine St. as the city prepares to conduct vital infrastructure work on its main downtown commercial street. 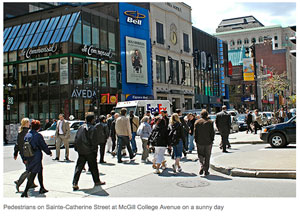 So says Stephen Leopold, chairman of real estate firm Immodev who was speaking to the Board of Trade of Metropolitan Montreal regarding “Ste.-Catherine St..: Montreal’s vital artery.” Leopold was active recently in promoting his vision of a new Champlain Bridge as part of the group AudaCité Montréal.

Montreal is aiming to revitalize Ste.-Catherine St. between Bleury St. and Atwater Ave. next year and the city has asked people to submit their ideas for revamp.

Leopold says that for almost a century Ste.-Catherine St. has been the largest, most unique and most diverse shopping centre in North America. The street is by far the greatest generator of commercial activity in the city, he says, but its true value often goes unrecognized.

“There is no street in the world that is as important to a major city as Ste.-Catherine is to Montreal. And that is why we must take special care to enhance its appeal.”

One way of doing so would be by heating the street and its sidewalks. Leopold noted that when Holland, Mich., a city of 100,000 that gets more snow than Montreal, decided in 1985 to heat some of its downtown sidewalks it paid off greatly. He says the area with heated sidewalks has had a spectacular increase in wintertime commercial activity despite competition from suburban shopping malls. The move was so successful the city has twice increased the number of heated sidewalks.

“It’s a no-brainer to realize how appropriate the same policy would be for Ste.-Catherine,” he says, adding the move can be done at a reasonable cost.

“Imagine a clean, green renewable energy-driven, snow-free, salt-free, slush-free and ice-free Ste.-Catherine that encourages people to visit it in winter, to walk on it, to shop on it and its side streets, and come in from the suburbs in winter, and yes, attract tourists in winter. This will be a commercial boon for downtown and act like steroids in boosting Montreal’s commerce and businesses and the livability of our city.”

Leopold also turned thumbs-down on the prospect of turning the street into a pedestrian thoroughfare. “Ste.-Catherine needs cars. Have we not learned our lesson from the abysmal failure of Prince Arthur St. (a pedestrian street that has fallen on tough times)?”

If Montreal doesn’t want to make it easy for people to use their cars downtown, they will move elsewhere such as to off-island mega-commercial centres that have already taken a chunk of downtown business. “The war on cars has not worked to our downtown’s benefit and it will not work.”

Instead, Leopold suggested every new parking meter on the street should be twinned with an electric car charger as electric cars will soon become the norm. “The electric car recharging network that we are already building in Quebec is irreversible and the incremental cost to adding chargers to Ste.-Catherine’s new parking meters would be miniscule.”

Aside from attracting tourists and locals, such moves will bring green-seeking businesses, start-ups, tech companies and traditional businesses that want to work in a green environment with extraordinary shopping and dining, he says. That will lead to more real estate taxes for the city’s coffers.

Leopold suggested a number of measures that can be taken while construction work is being done in order to avoid the damages that were done to business on other streets that were overhauled, like St. Laurent Blvd. These include:

– Analyzing how New York City is building a subway line on Second Avenue which allows traffic to circulate 24 hours a day;

– Eliminating disruptions during construction by working 24 hours a day and covering the street with steel platforms that allow car and pedestrian traffic to flow freely;

– Adding massive amounts of lighting to the street at night during construction. “Make it safe and inviting. If we don’t institute these lighting  measures during construction, we will be responsible for creating a dangerous criminal breeding ground on a street that has already become far less safe at night than it used to be” ;

– Adding hundreds of high definition facial recognition cameras and advertise the fact. “Let everyone know Ste.-Catherine is as safe as any street in the world, whether it’s 3 o’clock in the afternoon or 3 o’clock in the morning.”

Leopold says Boston, New York and Washington, D.C., were all in the economic dumps at some point in the last 50 years but are now succeeding and Montreal can do the same.

With a new Turcot Interchange and Champlain Bridge, an overhaul of the Bonaventure Expressway and two new superhospitals on the way, Montreal is rebuilding the limbs of its body. But “the real DNA of Montreal, is Ste.-Catherine. Let’s create a street that we can walk on, shop on and go to nightclubs and restaurants safely 365 days and nights a year.”