Ottawa’s office vacancy is already the highest it has been in a decade, though one area real estate broker says there’s a “shadow vacancy” just below the surface that could push the national capital’s rate into the double digits over the next year or so.

What James McNeil is talking about is impending departures of tenants throughout many of the city’s office buildings having a significant effect on official data in the near future, especially when combined with government downsizing and new buildings that are about to come on the market.

Ottawa’s vacancy rate was somewhere between eight and 8.7 per cent, according to recent second-quarter reports. CBRE Ltd. pegged it at the former and Colliers International had it at the latter.

McNeil, a former broker with Cushman & Wakefield Ottawa who recently started his own practice JJ McNeil Commercial Inc., said a look at office space being marketed by various landlords suggests the situation is worse than the available data suggests. 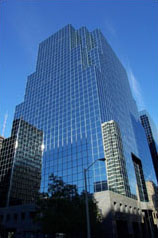 McNeil has other examples, such as Constitution Square’s 350 Albert St. (shown in image), about a block away, where 5,000 square feet were officially recognized as vacant in recent reports, though Oxford Properties is now advertising about 125,000 square feet space there.

“There’s a lot of buildings that are ending up with a lot vacant space, some of which we don’t know about yet,” he said.

All in all, McNeil estimates about 340,000 square feet of vacancy will be added to the inventory of Ottawa’s office space by the end of this year.

Then you have a slew of new buildings that are coming on stream, such as Morguard Corp.’s new 350,000 square foot tower on 150 Elgin St. in the coming months, all at a time when the federal government is laying off staff, trying to use up less space per worker and the private sector is not seeing growth.

While Morguard has much of this building spoken for with tenants such as KPMG, the Canada Council for the Arts and rumours about the Canadian Imperial Bank of Commerce going in, McNeil noted that these are simply “relocations,” meaning they’re creating vacancy somewhere else in Ottawa.

McNeil said newer, more modern buildings can be successful in luring tenants in this environment, but it will be the Class B and C buildings that suffer most in the coming months.

Since last year, the federal government has been embarking on a three-year program to cut nearly 20,000 jobs in an effort to achieve a balanced budget by 2015.

McNeil notes that not only is 72 per cent of the office space in downtown Ottawa occupied by the federal government, but much of the rest is by firms that do business with the government and are likely to be affected by spending cuts.

It’s because of this that McNeil has long been calling for a diversification of Ottawa’s economy to attract more private-sector enterprise from around the world and also nurture more homegrown companies. It’s among the goals of his efforts to establish downtown Ottawa as an eco-district that might appeal to major multinationals for whom sustainable operations is a major part of their branding. 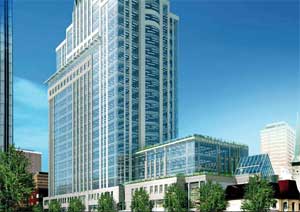 Kelvin Holmes, managing director of Colliers International in Ottawa, says factors such as a shrinking federal workforce, a lack of private-sector growth and new buildings, such as Morguard’s tower on Elgin Street (image seen on the left), make it quite likely the Ottawa vacancy rate will hit the double digits in the near future.

He noted that the moves of government to use less space per worker, referred to as Workplace 2.0, is the type of thing being done by organizations in the private sector as well. That includes his own organization that is looking to move into a new building in December that uses about 15 per cent less space for 30 workers. This is a trend that goes beyond government and economic cycles, and something people in the building management industry have to deal with, Holmes said.

“We’re all looking for ways to be more efficient, and real estate is one of our most significant costs, so we have to really manage the amount of space we’re occupying carefully,” Holmes said.

Greg Clark, managing director of CBRE’s Ottawa operations, said it’s plausible to expect the office vacancy rate in Ottawa to go as high as 10 per cent in the near future.

“I think the feds said not that long ago that they were going to reduce their footprint downtown by about a million square feet,” he said. “We think that they’ve done about 20 per cent of that so far. If they were to do the other 800,000 square feet . . . then that would get you to 10 per cent.”

That said, Clark added that 10 per cent is not an outrageously high number, relative to the rest of the country, and that it’s positive in the sense that is gives tenants an opportunity to move and update their spaces at reasonable costs.

He added that diversifying the economy of Ottawa so it’s not as dependent on government is a good idea, but not an easy task.

“I think every municipality in Canada would like to diversify their economic base,” Clark said. “I just think that it’s easier to say that than accomplish it.”