Greg Kwong, CBRE Canada’s regional managing director for Alberta, says not everything is doom and gloom in Wild Rose Country. 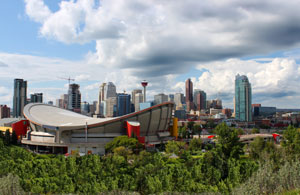 “Despite the drop in oil prices in the later part of 2014, there is a sense of long-term momentum and growth in Calgary,” Kwong said in CBRE Canada’s 2015 Canadian Market Outlook, released in December before the U.S. benchmark West Texas Intermediate dipped below $50 US.

While the long-term outlook remains promising, Calgary is beginning to see tangible consequences of a downturn in the oil and gas sector.

“We are already seeing an effect in the downtown core, where a lot of sub-lease space is on the market right now,” Kwong said this week. He referred to it as “a dynamic market” where 46 per cent of available office space in Calgary is now sub-lease. Typically, the rate is around 20 per cent.

“Our vacancy rate is still around nine per cent, and eight per cent is equilibrium, so we’re not too far off that right now. But we do expect that to trend a little bit higher in the first six months of this year.”

So far there has been no direct impact on Calgary’s industrial real estate sector, Kwong said, despite reports economic conditions brought on by falling oil and gas prices have scuttled development deals.

“People who have tied up land to build a few office and industrial buildings have seen their deals fall apart because they can’t get financing because Bay Street or Wall Street are saying that they’re not going to lend money in Alberta at this point.”

There’s been no pullback on the retail real estate front, according to Kwong: “Our demand for retail is as strong as ever. We’ve had a less than three per cent vacancy rate prevail in Alberta over the past 15 or 20 years.”

“We started seeing in the fall of 2014 that any long-term commitments were being put on hold,” he says, “but any existing commitments are still continuing.”

Harmsen says office vacancy rates increased by about a point from the third to fourth quarters in 2014 and now sit around seven per cent in downtown Calgary. He hasn’t seen a significant amount of sub-lease space enter the market yet, but anticipates an increase in the first quarter of this year.

Alberta has somewhat of a boom-and-bust economy and has previously gone through similar down periods. So while the current outlook may be less than positive, Harmsen says it’s an environment that can open some doors at good rates.

A great time to lease

“Our recommendation to tenants is that this is a great time to lease. There are going to be some fantastic opportunities with transactions as they wait for prices to rebound.

“I’ve seen this market in 2003-04 and 2008-09 and the deals we did in 2010 were fantastic. My clients and tenants are still thanking me for that. We did long-term deals. Landlords need to fill space and are prepared to do a market deal. Nobody wants to sit on space.”

Rebound in the future

Both Kwong and Harmsen are confident gas and oil prices will rebound and put new wind in the sails of the Alberta economy, with Harmsen assuring there’s no danger of Calgary becoming like Detroit.

Kwong says the consensus view among energy company executives is oil will remain below $50 a barrel through June but will end the year with an average price in the $70 to $75 range.

“At the end of the day, the commercial real estate business is being hurt on the office space front in the downtown cores of Calgary and Edmonton, but no one is saying that this is going to last and Alberta doesn’t have to be here anymore,” concludes Kwong.

“Everyone realizes that this is short-term pain, but, long-term, people are still bullish on Alberta.”