DTZ Canada president Colin Ross is upbeat about his firm’s prospects following the acquisition of his property services company this week by a private equity consortium. 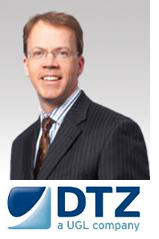 “It is phenomenal,” he said. “For us, it is a strong ownership that is committed to growth.”

In a US$1.2-billion deal that closed on Wednesday, DTZ was acquired by a private investment group headed by TPG, the Ontario Teachers’ Pension Plan and PAG. TPG is the lead shareholder with Teachers and Hong Kong based PAG holding equal-sized minority positions along with smaller holdings by some in the top management group, according to Ross.

Ross, a long-time Barnicke veteran who joined DTZ two years ago, is most excited about the appointment of Brett White, former chief executive officer of CBRE Group, will begin serving as full-time executive chairman of the new company.

“Brett has a ton of experience growing CBRE and acquiring 200 companies while he was there,” said Ross. “So, you are looking at a guy who has done it before and is experienced in bringing all the service lines and the brokerages together – and has a clear plan for growth.”

The plan for Canada

With new ownership, Ross said the plan for DTZ’s Canadian operation is straightforward: grow by adding services to its existing offerings. “For us in Canada, it is service-line growth. We will be filling in a number of areas and a number of cities,” he said, adding DTZ will also increase its ranks of agents across the country.

“It’s growth in a good way. We are not growing simply for the sake of growth.”

Ross expects to grow substantially. “Over the next three to five years, we would probably double our size.”

He expects most of that growth to come in the front ranks of agents.

“We are sitting at about 180 agents. The largest group of our staff is in the engineering, facility management and project management side.” As for agents, “we can double that on the brokerage side,” he said. In the past year or so, DTZ Canada has added about 30 agents.

DTC Canada, which currently has about 3,000 employees, operates 17 offices across the country and intends to expand that number with new locations in the GTA and on Canada’s East Coast.

DTZ’s new ownership touts its financial muscle and it has already backed up its words by actions. In September, a DTZ affiliate backed by the new owners agreed to buy U.S. real estate services firm Cassidy Turley with plans to combine it with the DTZ business in 2015. That acquisition will be completed by year end.

A TPG executive said the combination of “DTZ’s strong businesses in Asia and Europe, its existing businesses in the United States and Cassidy Turley’s market-leading business in the U.S. will create a global, full service property services company that will be top 3 in the sector.”

Ross said the Cassidy Turley combination will provide benefits north of the border.

“There are over 900 agents there, close to 4,000 employees there that will join us,” Ross said. “They service about 24,000 corporate locations just in the U.S. Canada is a natural; almost all of their clients have space in Canada and now they have a company to reach out to.

“With them coming in, with all their requirements, it creates a huge opportunity for us, for our people and our agents. It is going to help us build in those new markets as well.”

Ross is also upbeat about Canada’s real estate prospects given the strengthening U.S. economy and southward trajectory of the loonie.

“That is going to drive manufacturing. I have talked to our groups and lenders and different people and they are seeing a lot of investment by companies in the manufacturing sector, which is huge. Our low dollar drives everything. That can drive film production, it can drive animation studios and software design to launch programs up here.

“Our financial industry just keeps growing and you have certainly got a lot of growth in downtown Toronto. There are a lot of tenants looking for big space out in (20)15, ’16 and ’17. That is creating movement where it was pretty tough 10 years ago.”