Dymon Storage Corporation has set its sights on the sprawling GTA market for expansion, with plans to build approximately 80 facilities in the area stretching west to Hamilton and east to Oshawa. 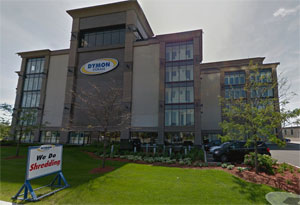 The Ottawa-based company claims it is not just another anonymous player in the storage industry thanks to a high-end offering that has won over residents in the nation’s capital. It currently has about 72 per cent of the Ottawa market, making it the fourth-largest self storage company in Canada.

With the completion of its GTA push, it expects to have 10 million square feet of space.

For example, it has installed solar PV panels on the rooftops of its Ottawa locations and is now the largest private sector producer of electricity in the city.

Since setting up shop in 2006, it has accumulated seven locations and 8,000 storage units. Its first outlet filled in about 4 1/2 months – “That is unheard of in the industry,” said Creighton. “Facilities of that size in the U.S. would typically take 36 months to fill.”

Dymon, which owns a couple of retirement residences in the Ottawa area, saw an opportunity in the storage game after investigating the U.S. market, which boasts three billion square feet of space devoted to keeping America’s treasures, junk and everything in between out of sight.

“We toured North America to dozens of facilities and we identified the key attributes of those that seemed to perform better than average,” he said. “We brought them all back and added a whole bunch of unique features and we created this Dymon storage brand.

“It is really different and it is unlike anything else anyone has experienced and not only have we improved the whole storage solution experience, but we have folded in a bunch of ancillary services and other offerings that have created a dynamic and unique business opportunity.”

Other benefits include a free fleet of trucks with a professional driver to move items into storage units, humidity- and climate-controlled environments (“your stuff would probably be better off with us than at your place of business”), a drop-off shredding service, 24/7 access onsite and staff 13 hours a day.

The company also offers a Kijiji-like service to help people sell their storage possessions on Dymon’s website and a moving service for people without an army of strong-backed friends.

“People think, ‘It’s storage, how can it be that exciting?’ but people really get that ‘aha’ moment when they walk through our front door,” said Creighton.

Dymon’s dominance of the Ottawa market is demonstrated by the fact it is the city’s largest retailer of moving supplies and boxes.

Creighton and another Dymon executive have lived and worked in the GTA region “so we are quite familiar with that market.”

The company, which has built its Ottawa business on serving time-pressed boomers, views the GTA a bit differently.

There are younger condo dwellers living with minimal storage at one end of the market and downsizing empty nesters unwilling to sell off the family heirlooms. As well, about one third of its customer base are business users.

So far, the company has secured a location in Brampton, another near Toronto’s Yorkdale Shopping Centre and others are in the works.

In its first expansion wave into the GTA, it is focusing on finding locations on the 400 series of highways “to create that instant visibility and to allow us to roll out our marketing plan,” said the Dymon executive.

The company, which has a 125,000-square-foot space requirement, prefers to buy its real estate, but is open to leasing and other arrangements. Most of its locations are greenfield construction, though it has the ability to retrofit space to suit its needs.

One of the options the company is exploring for the GTA is to repurpose old industrial real estate.

Lay of the land

The self storage business is currently dominated by REITs and public companies “that really are financial engineers” operating a mix of industrial park or rural locations.

“The big players tend to have a whole mishmash of different product that they grouped together and they brand,” Creighton said. Beyond that, there are “mom and pop” operators who own and operate their own facility.

Rather than hiding its locations, Dymon seeks the highest possibility visibility, hence its strategy to locate near business retail nodes.

“I think we have improved on the standard operation to the point where some of the big competitors to us elsewhere in North America actually sort of question, ‘Why do we do all these things?’

“The reason we do what we do is the customer demands it or wants it.”