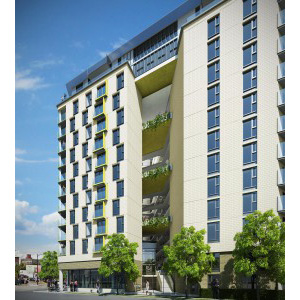 “Purpose-built rental is something that has been done very well in cities like Seattle and Chicago, but is only just starting to be done in Canadian cities,” said Edgar Development president Peter Edgar. “Our projects have amenities and services that cater to renters, and we know there is pent-up demand for this type of development in Vancouver.”

The 14-storey building is located along the busy transit hub at Broadway and Kingsway. It will feature a 4,925-square-foot ground floor retail component and a large-scale art installation by a prominent local artist that will be suspended above the main entrance.

The Duke will include studios, one-bedroom and two-bedroom units with granite countertops, a stainless steel appliance package, in-suite washer and dryer, dishwasher and microwave.

The property will feature underground bike storage, car share stalls, multiple furnished amenity decks, an inner courtyard that’s visible from every suite and covered by a transparent canopy, a penthouse-level indoor kitchen and dining space, and rooftop social spaces that include a designated children’s play area, dog run and barbeques.

The Duke is targeting LEED Gold certification and completion is scheduled for August 2017.

Vancouver’s apartment vacancy rate sits at just 1.4 per cent, according to the Canada Mortgage and Housing Corporation’s spring 2015 rental market report, and The Duke forms part of the city’s Rental 100 policy that aims to create 5,000 new units of market rental housing by 2021.

“I think it’s a good start and that the city’s intentions are right, but more incentives are needed to make market rental projects feasible in Vancouver,” Edgar said of Rental 100.

Edgar Development, which launched in 2009 and has experienced significant growth in the last two years, previously developed a 68,773-square-foot retail centre in Port Coquitlam, B.C. and developed and sold the 135-unit Astoria Retirement Residences in the same city. It just expanded into new office space in Vancouver’s MNP Tower at 1021 W. Georgia St.

In addition to The Duke, Edgar Development has two mixed-use, purpose-built rental projects on the go in Edmonton:

* The Hendrix — a 30-storey, 260-unit apartment targeting LEED Silver certification — is situated near the Grandin LRT station, the University of Alberta and the downtown core. It features street-oriented townhomes in addition to studios and one-, two- and three-bedroom units. The J.T. Ross House will be preserved and incorporated into the development, bringing a touch of history to its new life as a boutique office space.

* The MacLaren will consist of a 25-storey, 240-unit tower atop commercial space on the site of the historic Buena Vista Building at 124th Street and 102nd Avenue in the Oliver neighbourhood. Edgar earlier told a zoning hearing that the company would dismantle the north, south and west facades and incorporate them into the new building.

“The Hendrix is well underway, with partial occupancy scheduled for August 2016, and we’re just breaking ground on The MacLaren,” said Edgar. “We’re anticipating occupancy for The MacLaren in the fall of 2017.”

The company is in the planning process for a rental tower in Calgary’s Beltline that it hopes to start constructing next summer. It’s also looking for opportunities in the retail and industrial sectors as well as in purpose-built rental development in Vancouver, Edmonton and Calgary.

“We’re being a little more cautious in Alberta, but we don’t believe the sky is falling,” Edgar said of the impact of the downturn in the province’s economy on his company. “The construction market was getting overheated and, had costs kept rising, it would have made new development projects very difficult to justify.

“The slowdown in Alberta should bring costs back down, which is good for future development in the province. Plus, our typical construction schedule is around 24 months, which should be a sufficient amount of time to see a rebound in oil prices.”