While many commercial real estate pros are complaining that it is a tough time to do deals, Edgefront REIT has encountered no summer slowdown, inking a trio of deals in July. 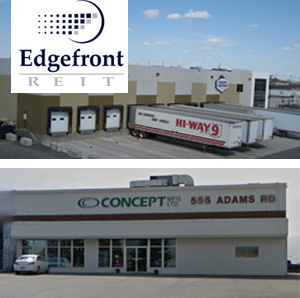 “There are deals to be had if you are creative in the way that you get them done,” said Kelly Hanczyk, the REIT’s chief executive officer. “We are actually having a pretty busy summer which is wonderful.”

All three purchases highlighted Edgefront’s unique approach to deal making which relies on long-term sale leasebacks and the vendors becoming long-term shareholders in the REIT by accepting units as part of the sale price.

It’s an approach that Hanczyk said is finding favour with sellers and makes a great deal of sense for the Calgary-based REIT.

“We are able to be creative and not have to hit the public markets for our equity raise,” he explained. “It is a relatively creative and cheap way to raise capital.”

For the REIT, the math was easy. “I looked at where the REIT was trading, and where all the other REITs were trading right now, and I wasn’t about to go and pull an equity raise way below NAV and then pay commissions on that. It would be really costly to the balance sheet. So I targeted this as our plan for this year and we are getting very good response on it.”

The Edgefront CEO said beyond the current trio of acquisitions, the REIT has another two deals in the works which are utilizing the same “vendor takeback/share takeback” model.

“For the rest of the year our plan is to continue with this strategy of partnering up where guys see the value of the REIT units and they like the story and really want to be involved with it at an early stage. They get some tax advantages on their aspect in structuring deals this way so it is really a win-win for both parties.”

He admits it can be a slower approach than all-cash transactions.

The just-completed, $8.5-million purchase of the Barrie property neatly illustrates the REIT’s current acquisition strategy. The REIT funded the deal through the issuance of 1,000,000 REIT units and 3,470,985 LP units of a subsidiary limited partnership of the REIT at an issue price of $1.90 per unit.

That made sense for the seller (Prodomax Automation Ltd.), which took a long-term sale leaseback as part of the deal. The company’s owner “becomes a very significant shareholder with escrow provisions in there so that he holds them for a while. Gives us a great company, good building, solid going in cap rate.”

In the case of the 93,433-sq. ft. building at 555 Adams Rd. in Kelowna, the vendor accepted $3.8 million of the $7.5-million purchase price in trust units with the remainder in cash. The building is similarly 100% occupied with a 3.8 year lease. (Lower building in image.)

In both cases, Edgefront will take out mortgages on the property to generate cash for further purchases.

The latest acquisition in Calgary of the 29,471 sq. ft. Canada Cartage cross dock facility at 4700 – 102 Avenue S.E. provides the REIT with a national name tenant with a 9-year lease. The seller accepted $2 million worth of REIT units as part of the $22-million sale price. (Top building in image.)

It also caps the continuing evolution of the REIT. “With the completion of this transaction, plus the two previously announced deals, we will have successfully grown the REIT’s asset value by approximately $38 million to over $150 million and market cap by $14.3 million without the need to raise equity in the public markets.”