Edgefront, a REIT with a private equity twist

When we last wrote about Kelly Hanczyk in April 2013, the former chief executive officer of TransGlobe Apartment REIT was serving as CEO of recently founded Edgefront Realty Corp. with hopes of turning the Toronto-based real estate company into a REIT. 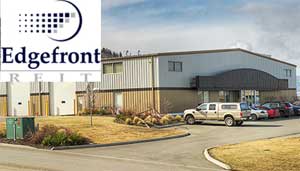 A year later, Edgefront has compiled a pretty decent track record of success. It achieved REIT  status in January, acquired 10 properties and significant minority shareholder and business partner at that time, and adopted a new Western Canada business focus.

That’s all the more impressive given the fact Edgefront tried unsuccessfully to launch as a REIT last May as investors were fleeing the sector after the U.S. Federal Reserve threw cold water on real estate by raising interest rates.

“We came back strong in January with a refocus and a new partner so things have been going really well,” said Hanczyk.

Edgefront’s new business ally, TriWest Capital Partners of Calgary, has a history of investing in a diverse range of companies. According to its website, the private equity firm, founded in 1998 after the sale of Burns Foods, has invested in 28 companies in a “broad cross-section of the economy.”

Edgefront’s biggest investor, which owns about 40 per cent of the REIT’s units, gained its stake by participating in a sale-leaseback transaction in January and is a partner in the trust’s management team.

Currently, Edgefront owns 15 properties in Western Canada and boasts a market cap of about $55 million.

During last year’s failed REIT bid, Edgefront’s geographic focus was on Nova Scotia, but the company has shifted westward to focus on the hotter economies of the Prairie provinces and B.C.

“Our initial focus is on the West, it is actually quite simple and a little bit different story than what you have heard from everyone else,” explained Edgefront’s president and CEO. “I like to call us a real estate investment trust with a private equity twist.”

The difference is a steady pipeline of industrial properties that are owned by TriWest and access to deals that come before the private equity firm.

“They look at any number of opportunities every year, so we get the opportunity to see that deal from start to finish if we want. If any companies that they are looking at have attractive real estate, it gives us an in on buying that real estate off market. So it is really unique and it opens up a whole new world of real opportunities.”

All 15 properties in Edgefront’s portfolio were purchased under that private equity, off-market model, Hanczyk said.

“I like to call us a small-cap REIT with larger-cap fundamentals,” he added. “We really focused on coming out with a low AFFO payout ratio. We are about 77% and not too highly levered at only about 50% debt to GBV, so we really tried to be conservative in our approach.

“I think that is what investors are looking for now; they don’t want to see another highly levered, overpaying (REIT) – they are really looking at the fundamentals.”

Edgefront’s growth rate will be limited by how quickly and easily the REIT can raise capital.

“The market on the REIT side is a little slower than it used to be, but we did get our recent transaction done and I think our story resonated well enough that we raised, with the over-allotment issue, about $19.25 (million) to complete our transaction.”

The Edgefront CEO was referring to the July 16 acquisition of three industrial properties in Alberta, controlled by TriWest, that was paid in part by the public offering of $19.25 million worth of units in the trust.

“The story was really well-received when we marketed it – it is a little bit different and investors see the value of the Canadian Western market obviously, which is fantastic. We have a lot of exposure to Alberta which everyone seems to like with the fundamentals being stronger than the rest of Canada.

“So I think it is not a matter of finding product or doing it, it will be a little bit subject to the capital markets and the ability to raise capital.”

Edgefront expects to complete another deal this year and is planning to make $100 million to $200 million worth of property acquisitions in 2015.

“Hopefully, we can show continued growth and continue to be attractive to people,” Hanczyk said.

Edgefront’s most recent acquisition, first announced on May 30, for the three TriWest-owned properties totalled $36.7 million. It comprised:

• An aggregate of 277,748 square feet of gross leasable area on 57.2 acres of land located in Lethbridge, Clairmont and Rycroft, Alta.;
• Currently 100% owner-occupied and representing industrial real estate that is mission critical to their businesses;
• The acquisition properties are being acquired on a sale-leaseback basis from the tenant owners for 15-year lease terms for the Lethbridge and Rycroft properties and a 10-year lease term for the Clairmont property;
• The leases were “triple net”, with the tenants responsible for all operating costs and maintenance of the properties, and have embedded rent escalations based on increases in CPI.