Edmonton’s industrial land market may be a pipeline away from an economic boom that could see demand for serviced lots skyrocket.

“The amount of readily available serviced industrial land in Edmonton is running out,” says Cushman & Wakefield Edmonton partner and industrial land leasing specialist Burke Smith. “We’re not at the boom levels of 2006, but it’s a very healthy market. It’s not uncommon to see industrial land sell at $1,000,000 an acre depending on its size, location and build potential.” 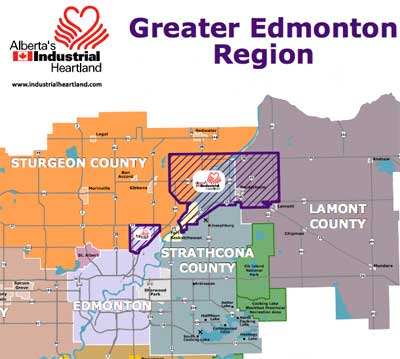 With the Alberta and British Columbia premiers now talking more agreeably about a new pipeline to the West Coast and TransCanada’s recently announced 4,500-kilometre Energy East Pipeline, some industry watchers say it’s not if there’s going to be a soar in demand for industrial lots, but when.

And of course, there’s Keystone XL.

“We’re asked all the time about the impact that Keystone will have on the Edmonton industrial land market,” says Smith. “We say, ‘Look at the whole Alberta oil and gas industry.’ Energy is moving to markets. It may be going by rail, but it’s going. If Keystone doesn’t go, the market will remain steady. If Keystone goes, we could see a boom.”

In its September 2013 Industrial Land Supply overview, the City of Edmonton reported the value of building permits for industrial-related activities for 2012 rose to $3.25 million, with activity in 2011 and 2012 matching levels not seen since before the 2008 global recession.

The report also states the average annual industrial land absorption rate for 2011 and 2012 was 163 hectares, eclipsing the 124-net-hectare average rate over a 10-year period. The stats, says the report, point to “an upward swing in industrial land demand.”

“The city recognizes we have a limited supply of land based on our boundaries,” says City of Edmonton senior development engineer Ken Mamtzask.

That’s why the Alberta capital recently opened conversations with the County of Leduc to annex lands south of the city’s current boundary extending to the Edmonton International Airport.

However, transforming raw land to shovel-ready industrial lots can be a long and expensive process that often hinges on forecasting what the market will want and when.

“Servicing land is a big investment,” says Mamtzask, adding that many industrial areas must be developed to the full urban standard of underground utilities and storm sewers, sidewalks, boulevards, curbs and gutters.

And, unlike the predictability of the housing market, industrial land developers face the risk of developing lot sizes that may not be suitable for future demand.

“What we’ve found in the last six to 13 months is a shift in what the end-user is looking for,” says Craig Dickie, Alberta president of Walton Development and Management, one of the companies most active in developing much of Edmonton’s industrial land. “There’s an interest in larger lots, from 10 to 20 acres and potentially up to 40 acres for distribution and warehousing.”

Growth and market a risk

Still, the risk is the timing of growth and market conditions.

“We’re well-positioned in the market,” says Dickie.  Walton has approximately 7,000 acres of which 5,744 acres is pre-development land and 1,203 acres that is actively being developed. “We have immediate delivery, two- to three-year land, five-year land, it  can all be brought on if the demand is there,” he added. “We move quickly to get approvals in place, so we are ready to go and have the ability to react.”

Walton’s design and delivery strategy involves keeping close contact with both the brokerage and leasing community and the City of Edmonton so it is well-prepared to meet market needs.

“We approach the layout so that there’s flexibility in the design, so we can easily consolidate lots if we get a larger user or provide the ability to build out over several years,” says Dickie.

Walton is the primary developer of the city-initiated Edmonton Energy and Technology Park, a 12,000-acre property on the northeast edge of what is known as Alberta’s Industrial Heartland, (shown in image above) Canada’s largest hydrocarbon processing region and home to more than 40 companies in a variety of sectors, including producing and processing oil, gas and petrochemicals and advanced manufacturing.

Dickie says they’re looking to deliver serviced lots that can accommodate 20- to 60-acre end-users in 2014.

Another 120 acres of fully serviced land in the Yellowhead Industrial Park is expected to come available in 2014 and 60 acres of salable land will come onstream in the Stony Industrial Park. Both industrial parks are located in Edmonton’s northwest.

Then again . . . there’s the potential of new pipelines.