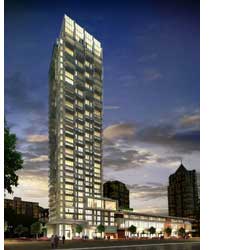 “Calgary just looks right and feels right and has incredible potential for us,” said company president Ryan Bosa, who has also worked on projects in Vancouver, southern California and Seattle. “Vancouver is a great market, but a lot of guys are fighting over the same scraps.”

According to its website, Embassy BOSA has committed to building more than 4,500 homes in Calgary, where it has “a deeply rooted vision to create sustainable communities enriched by the size, quality and the complexity of its projects.”

Construction will begin in the spring, with homeowners expected to move in three years later. The $120-million, 34-storey development will house 223 residential units averaging about 1,000 square feet each along with 90,000 square feet of retail and office space anchored by an unnamed high-end grocery store.

“The commercial portion is three levels, with the first two being retail and the last office, with each level being 30,000 square feet,” said Brian Kozak, First Capital executive vice-president for Western Canada.

“We have a large upscale grocery store occupying the second floor of the development, with the retail grade likely consisting of a mix of restaurants and fashion. At this point we cannot disclose the name of the grocery store.”

Mount Royal Village is a mixed-use office and shopping centre that was built in 1979 and purchased by First Capital Realty for $35.1 million in late 2011.

“The 17th Ave. and Mount Royal Village area is known as one of the city’s top vibrant districts, with a growing collection of restaurants, shops and services, and we are proud to complement this expansion through our latest residential development,” said Bosa.

Suites at The Royal will vary in size from 598 to 2,018 square feet, with prices starting in the mid-$300,000 range. Penthouses will be designed for buyers who want extra large spaces.

Bosa founded Embassy BOSA in 2003. He formerly worked for Bosa Development, which is headed by his father Nat, while his brother Jim is president of Appia Development in Burnaby. While the family members share advice, the businesses operate independently.

Embassy BOSA is responsible for: the 18-storey, 84-suite Generations condo in New Westminster, B.C. that was finished in 2006; the 30-storey Fresco and 32-storey Mosaic of Renaissance complex that had 369 suites upon completion in Burnaby in 2007; two 30-storey Legacy condo towers in Burnaby that were finished in 2008; and Burnaby’s 30-storey, 184-unit Vantage, which was completed in 2013.

Bosa believes there was a mistaken stereotype in Calgary that everyone wanted a house of their own with a nice-sized yard. While that may have once held sway, affluent Calgarians have travelled to other cities and seen the advantages of living downtown in higher-density buildings close to a variety of amenities. They’ve returned and asked for similar places in Calgary.

“We feel like we got in there when everybody else was asleep on it a little bit,” said Bosa. “There are a lot of outside developers in Calgary and they treat it like they’re outsiders. I want to do something that’s going to make Calgary great and do something more than just getting money out of some units.”

Embassy BOSA has big plans for the formerly neglected East Village area of the city, which has become revitalized through a master plan overseen by the Calgary Municipal Land Corporation that envisions housing for 11,000 people as well as office, retail, civic and cultural space.

The historic Simmons Building is undergoing major renovations, a 190-unit condo from the FRAM + Slokker development partnership should be done next summer, and the 160,000-square-foot National Music Centre is expected to be completed in the summer of 2016. A new library, hotels and a 300,000-square-foot retail site overseen by RioCan REIT (REI-UN-T) are planned for the area.

The company will build 40-storey and 23-storey towers with approximately 500 residential units in a partnership with RioCan, which will provide 200,000 square feet of retail space anchored by a Loblaws, nearby in East Village. The groundbreaking for this $300-million project is expected in the second or third quarter of next year.

“It was a very run-down area and now you can hardly get through there because there’s so much under construction,” Bosa said of East Village. “In another year, it will be quite vibrant and every year after that will be stacked on top of it.”

Embassy BOSA is also joint venturing with Canada Lands Company for a project that’s planned to add 2,500 units of multi-residential housing in low-, mid- and high-rise buildings on a 22-acre residential and retail use site in the Currie Barracks district of southwest Calgary that formerly housed the CFB Calgary military base.