The world continues to get smaller, the rich continue to get richer and Canada is a go-to destination for well-heeled foreign real estate buyers. 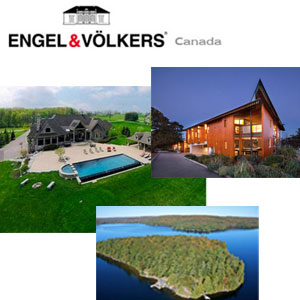 That’s why the recent expansion of German-based luxury realtor Engel & Völkers to Canada makes so much sense.

In September, the company officially opened up its new location at Avenue Road in Toronto at the same time new locations opened up serving York (King City) and Collingwood/Muskoka.

“I believe the luxury market is going to continue for a few years more,” said Ron Amendola, owner of the Toronto uptown office.

The 25-year broker and Toronto native is getting a crash course in how the city and country are viewed by wealthy, mobile foreigners.

“They want to buy”

“People coming in as professionals come in with an abundance of money and they want to buy. So they are looking at the good neighbourhoods and for them, what we would have thought at one time as a lot of money, for them, where they are coming from, it is not a lot of money.

“They see Canada, Toronto as very safe, stable, and cheap.”

So where are they buying? “All the great areas. Everybody wants to be in the good areas.”

That includes Lawrence Park, Forest Hill “and then if you are big bucks Bridle Path and Rosedale.”

Catering to the international elite has made Engel & Völkers one of the world’s leading companies specializing in the sale and lease of premium residential and commercial property, yachts and private aviation with more than 650 brokerages in 39 countries.

Doing anything and everything is “part of our white-glove service,” said Amendola.

“Let’s say we had someone coming in from Russia or Germany to purchase a property . . . picking them up at the airport for starters. Don’t make anything difficult for them, make it easy for them.

“Anything that if we were travelling abroad that would be appreciated from a business perspective is what we all do.”

The office includes approximately 15 sales people, many of whom worked for his prior brokerage which operated out of the same building on Avenue Road.

Engel & Völkers is a bit further ahead in its North American expansion in the U.S., where it has locations in cities such as Atlanta, Austin, Houston, Beverly Hills, St. George, Long Beach, L.A., South Bay, Minneapolis and Charlotte.

Canada can expect to see further expansion by the realtor.

“Head office people have told me that there are not going to be a lot of offices. They don’t want to saturate. They are more concerned with the calibre of people that would be running these offices.”

Markham is likely to be one of the next sites for an office, Amendola added

Amendola added the Toronto luxury market starts at around the $2 million mark in the areas in which his agents work.

“It sounds like a lot for me, but when you put it in an international perspective, it is not.”

Since August, prices rose more than 12 per cent compared to last year, he noted.

Buyers are not in short supply, either. “Really what there is a shortage of is good properties. That is why the prices keep going up in our immediate area.”