With the development cycle in high gear for the past three years and 20 million square feet of office space currently under development in Canada, it seems fair to ask: How long can this continue? 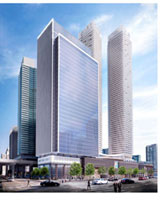 That was the unanimous answer of the optimists society, better known as a panel of office industry players tackling the topic of the office sector at the recent Real Estate Forum in Toronto.

“It does look like there is a lot on the table right now when you look at these markets, but the reality is they are all well pre-leased,” Jan Sucharda, president and chief executive of Canadian commercial operations with Brookfield Office Properties. “As an industry, we haven’t seen groups go out and develop on spec; very little of that has happened over the last two cycles so I think everybody takes a cautious approach.”

The Brookfield CEO noted that the company brought in about 4.5 million square feet of new Toronto office space in 2011 and 2012 and was able to maintain its target five per cent vacancy level.

“So now we are doing it again, and we have another round of development that is underway and there is about, in the downtown core, about 4.5 million square feet coming in, pre-leased in the 55% to 60% range, so again a good healthy response from the market for this need.”

He added that it remains to be seen how older “backfill” space will fare as tenants move to new state-of-the-art buildings.

Sucharda said the Toronto performance, representative of office results in the country’s other big cities, was largely a made-in-Canada production.

Jones Lang LaSalle’s Miller challenged the “bravado” among his panellists and said his firm could envision a “tenants’ market” in a year’s time if a current slump in the office market persists.

“I’m not sure I quite agree with you based on our experience across the country,” said Michael Catford, vice-president of real estate with the Healthcare of Ontario Pension Plan (HOOPP). “We have close to two million feet of new office space under construction in a mix of downtown and suburban formats, all of which will be delivered between 2014 and 2016, in a move of bravado or complete stupidity depending on how you want to look at it.” (HOOPP’s One York shown in image)

So far, bravado appears to be a winning strategy for HOOPP. “We are 55% pre-let across the board,”  Catford said, “and what I think has been particularly encouraging is the suburban space we are developing, particularly in the west end of Toronto, has actually been leasing quite well even though we have barely put in the shovel.”

Catford said tenant demand may indeed be stronger than firms such as JLL predict and that industry watchers may be underestimating the pull new space has on tenants.

“There is clearly a move on the part of the tenant community from old to new,” he said. “New buildings are offering all the things that tenants are looking for now, which is incredibly better efficiencies, lower operating costs, space where you can jam more people in if you want to, and that is really sort of driving the demand side of the equation.”

That shift will pose headaches for owners of older office space who will have to accept lower rents, renovate or repurpose their buildings or ultimately tear them down. “As one of the panellists said on Monday, ‘We have a market that is under-demolished,’ which is a phrase I rather liked,” Catford said.

Office space in Quebec’s biggest market is truly a tale of two cities, said Daniel Peritz, senior vice-president for Montreal and Ottawa with Canderel Management Inc. “You have got tenants who are out looking for larger blocks of space having trouble finding good modern, efficient spaces” and those offering “garden variety 5,000- to 8,000-sq.-ft. tenancy” where the effects of a market slowdown would be felt.

Peritz observed Montreal continues to be a “very difficult market to read.”

Rents and sentiment had been slowly climbing since the financial crisis but sentiment changed abruptly with the election of a Parti Quebecois government in the province.

“That had an effect on business decisions,” Peritz said. “We now have the government intervening the market in what would appear to be a big way – although those projects they recently announced will not be delivered until 2017-2018, they still will have an impact because they will vacant some significant space in the city.”

Last month, the provincial government announced plans to build a $250-million 14-storey office tower in downtown Montreal that will accommodate 2,500 employees currently scattered in office space throughout the city.

“A lot of the larger users looking for new space are coming to grasp with higher rental rates, but the speculative space that remains once you start to build these buildings is the challenge in the face of the balance of the market and their ability to pay those rents,” said Peritz.

“Depending on a variety of factors, including political, I don’t think we will see a lot of major building but you will see some building,” he added, noting Canderel has a 1.2 million-sq.-ft. office development on its project that could start in 2014.

In Ottawa’s formerly sleepy office market, Peritz notes that the federal government “has made a lot of noise” about moving out of the downtown but has not yet delivered on that threat.

“There is no question that with the existing government in place, they are reducing their occupancy, they are trying to upgrade,” Peritz said. “They are delivering a building of about 600,000 sq. ft. at the end of this year. That will result in vacancies in some older buildings.

“That market is volatile, but as a comparison to Montreal, when Ottawa is at six per cent (vacancy) everyone is hitting the panic button. In Montreal, six per cent  is something people would be almost joyous to have.”