Existing buildings catching up to new high-performance ones

New, high-performance buildings will add 5.7 million square feet of office space in Toronto in the next two to three years, and the same story is unfolding to smaller degrees in major cities across Canada. 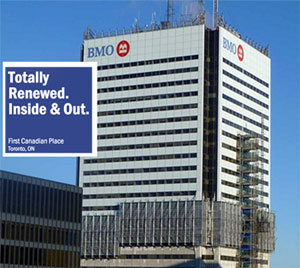 This phenomenon is introducing fresh challenges for existing structures, which still comprise 99 per cent of building stock and need to compete with highly engineered, state-of-the-art, new properties.

Five experts at the recent Green Real Estate Conference in Toronto considered how to convert existing assets to level the playing field.

Energy performance is the primary consideration for sustainable commercial office spaces, Manikel said. Fifty is the average Energy Star score and 69 is the prerequisite for LEED certification. The best buildings in downtown Toronto have scores in the mid- to high-90s and buildings need to be in the 80s to be considered high-performance.

MacGowan posed several questions to the panelists, and below are their responses:

What’s the most important thing to transform an older building into a high-performance building?

Barbieri: He said LEED certification is most important for LaSalle’s assets and that the company spends about $250,000 per existing building to achieve LEED Silver to LEED Gold certification.

“It’s something that everyone recognizes and understands, and it suggests that the building is efficient and sustainable.”

Manikel: “If there’s one thing to focus on, it’s a management strategy and management process. None of this happens effectively without a scheme for getting buy-in at all levels of these buildings.”

How do older buildings compete with newer high-performance buildings?

Barbieri: “When you’re comparing an older building to a newer building, you don’t stop at sustainability,” he said, adding it’s important to do other renovations to make it more competitive and attractive to prospective tenants.

What will be the catalyst for change?

Gray-Donald: “When people leasing large spaces and their brokers are more explicit about their expectations for energy-intensity and common-area maintenance costs and breaking out utilities, we’ll see increased movement. Asset owners are moving at a pretty strong pace, but they’re waiting for that market signal to come through.”

Are new LEED Gold Plus buildings in Toronto hurting or helping the case for high-performance retrofits of existing building stock?

Westeinde: “Retrofits have been lagging but are catching up quickly. I directly correlate that to the success of LEED and sustainability programs that initially focused on new construction because they make other buildings look worse. And to compare to them, it’s now much more measurable to see what you are and aren’t doing.”

Toronto is leading North America from a core development perspective with new office and residential product on the market. “It’s a bit of an experiment to see what that market pressure does to see how fast it accelerates the adoption of deep retrofits of existing buildings because it’s a direct threat.

“What was ‘pretty up your lobby and you should be OK’ is no longer good enough because, beyond energy and those other things, the real focus now is on health and indoor air quality. That’s a big problem for a lot of older buildings and requires a fairly major overhaul.”

When an owner is looking at implementing a sustainability strategy for their existing building, what type of returns other than financial would you present to them in order to help that decision-making process?

Barbieri: “I think what you’re doing by making your building sustainable, whether it’s LEED certification or anything else, is protecting the downside. In a market where everyone else is doing it to stay competitive, you also need to do it.

“It’s hard to say that a B-class building in Toronto that’s not certified and not sustainable is going to be able to compete well with some of the newer product coming into the market.

How might mandatory labeling on a bigger scope come into play to drive more sustainable buildings?

“The mandatory labeling that’s coming to Canada is energy reporting. We don’t know exactly what that’s going to look like, but sometime soon all big owners or managers of buildings are going to have to report their energy performance. So we’ll no longer be talking about moving class-B buildings up to compete against shiny new class-A buildings. There will be class-A buildings that nobody realized were pigs that will have to do something so they don’t get caught with their pants down.

“A recent example is when New York City introduced its ordinance to call for mandatory energy reporting. Some buildings were caught by surprise and had to have a story about why they only had an Energy Star score of three. Most of the owners we work with now are trying to stay ahead of that curve and at a minimum trying to understand where they’re at now and making plans for improving on that performance ahead of time.”

Part two of this discussion will be published in next Thursday’s edition of Property Biz Canada.